This month we will be looking at the scrum. The scrum is something which can easily change a game. A team with a poor scrum is always at a disadvantage due to the amount of scrums which occur during a game and will be more likely to lose possession, momentum and ultimately the match.

In this video of a New Zealand v Ireland match, you can see how many scrums there can be in a game, which proves why it is so important to have enough force and tactical awareness in the scrum to dominate in this vital set-piece.

When does a scrum take place?

A scrum is called by the referee to as a way of stopping the game and re-starting the play after the following have occurred:

What happens when a scrum is called?

The scrum is formed at the place where the infringement happened. It is important to note that all scrums must take place at least five metres from the touch or try lines. The referee will make a signal for the scrum like the one below. 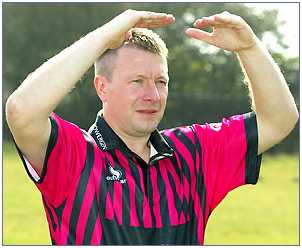 Who is involved in the scrum?

The scrum is one of the most physical parts of rugby, and requires all players involved to not only be fully committed and use all of their strength, but also to all know what their role is in the scrum.

In the scrum there are eight forwards. Although a scrum may look disorganised to the untrained eye, the reality is that all eight players in the scrum have a job to do to make sure their side gains a crucial advantage which gains the side possession and yardage.

The players in the scrum include the hooker, two props, two second rows, two flankers and a number eight. 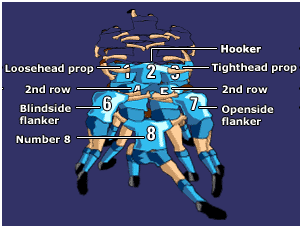 The most important person in the scrum is the hooker, whose job it is to hook the ball to retain or gain (if it is not his side’s put in) possession. The rest of the players bind together and use all of their force to try to gain as much ground as possible. It is for this reason that a heavier pack can have a big advantage (please see below).

The two second row forwards is to join together behind the front row and place their heads in-between the hooker and the props.

The two flanker’s roles are to link with the props and second rows on both sides of the scrum.

What happens once the scrum starts?

At the start of the scrum, the scrum-half of the side who have been awarded the scrum will wait for the referee to say “Crouch, Touch, Pause, Engage” and the scrum-half can then feed the ball in from the left-hand side down the middle of the channel between the two teams in the scrum. The team feeding the ball always has an advantage here because the scrum-half will time the put-in of the ball perfectly to give his team the advantage and will notify the hooker discreetly when he/she is about to feed the ball.

After feeding the ball the scrum-half cannot touch it until it has come out of scrum, and the other six backs must line up behind the scrum waiting to receive the ball. The backs must be at least five metres behind the last forward of their team. If they are not, they may be penalised by the referee.

When does a scrum restart?

The referee orders the scrum to be re-started on three occasions:

(1) If the scrum rotates 90 degrees. This is normally due to the opposing side putting so much force into the scrum that they are able to overpower the opposition and turn the scrum. This will result in the scrum being retaken with the side that has turned the scrum getting the ball to feed in.

(3) The ball does not come out quick enough. Sometimes the ball can get stuck in the scrum and cannot make its way back. In such a case the scum will be restarted with the same team in possession of the ball.

Ultimately, the referee can ask for the scrum to be re-taken as many times as he likes. One of the number one things that the referee will look out for is foul play in the scrum. His job is to try to keep the players safe and following the rules with the aim of avoiding injuries (please see injury section below).

When does a scrum finish?

Once the ball is out of the scrum, the opposition scrum-half is free to tackle their opposite number for the ball.

However, often the eight man will choose to keep the ball secure with his foot to gain more time, e.g. in preparation for a kick or if his side’s scrum is strong and he can use the time as an opportunity to pick the perfect time to use the ball (as described above). This often happens when the team in possession have an attacking scrum near their opponent’s try line. This means that the opposing scrum-half cannot get their hands on the ball because it’s still in the scrum.

The size of the pack in a scrum is crucial to a team gaining possession. This exemplified in the Six Nations 2012 England vs. Ireland match where England’s heavier scrum was able to gain more momentum and power in the scrum throughout the match, which allowed England to gain possession every time.

Of course, with the physicality of the scrum, injuries can occur. Most injuries occur when the scrum collapses, which can result in players suffering from serious injuries from broken bones to paralysis. The players at most risk are the front rows since if the scrum does collapse it is they who will feel more of the impact of the collapsing scrum.