LATEST UPDATE: The England 7s team has just confirmed that it will, once again, be participating in the tournament. Register your team and have the chance to play against professional players and test yourself (or get some bragging rights for the pub)! 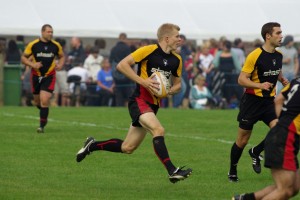 The 47th annual National Pub 7s will be taking place on Sunday 26th August at Harpenden RFC at their Redbourn Lane ground in Harpenden, Hertfordshire (25 minutes from King’s Cross).

The National Pub 7s started in 1966 when teams would submit a sevens side with the support of their favourite drinking place. Now this competition has grown into a nationally recognised and respected event attracting high calibre teams such as the Army, the White Hart Marauders, Samurai and occasionally England representative teams. However, the focus of the tournament has always been on the fun social side of the game and the tournament serves as a perfect opportunity for eager teams to have a pre-season run-around.

There will be four competitions on the day with each separate competition containing teams of roughly equal standards: the Singleton Cup, the Barrel; the Plate and a Veterans competition.

The format of the competition will consist of leagues of 3 or 4 teams, depending on the final number of entrants. The winners of each league will enter a knockout phase against the other winners. This is the main Singleton Cup competition. The runners-up in each group will play each other in the Barrel competition and the bottom placed teams will do the same in the Plate competition.

Mismatches can occur in the early league games but then the elite teams can take things easy and the less talented squads will have bragging rights later on in the pub about the time they played against this or that international!

Every team, no matter what their ability, has a chance of not just proceeding quite some way in the competition and winning one of the trophies.

In addition, a veterans competition will be played again this year, in which enthusiasm will again struggle with declining energy and speed but will no doubt produce a competition which will satisfy and exhaust all those who take part.

Please register your interest by downloading a form from the links at the right hand side of this page (Veterans or others) and post it, together with your cheque, to the address on the form.

It is also possible to camp on the club’s grounds on the preceding evening (Saturday) or the evening following the tournament (Sunday.) The clubhouse will be open for breakfast on the Sunday and Monday mornings and hot showers will be available. Let the club know if you intend to camp in order to ensure that they have enough bacon and eggs!

FindRugbyNow will be there on the day providing media coverage. It will also be submitting a FindRugbyNow team to the competition, so if your side is not able to come down on the day, email us at info@findrugbynow.com and join our side!

For more information, please check out the website: http://www.nationalpubsevens.com

Posted on 10/06/2012 by Ellaine
Posted in Rugby Sevens, Tournaments and Competitions
Tweet