The Basics of Try Scoring

This week I will be looking at try scoring and how to avoid making mistakes that can cost your side a victory. This is a basic but all-important rule as it is the main way to win a match (other than kicking conversations, which are worth two points).

A try is scored when a player touches the ball down inside the opposition’s in-goal area between the try line and dead ball line. This will result in your team gaining five points, and if the conversation is successful than your team gains an additional two points bringing the total to seven.

BBC Sport has a short article about the basics of try scoring here.

Sometimes a player needs to dive over the line with the ball if he is on the verge of being tackled and the dive will ensure that he crosses the line and gets the try. However, the dive has also been used by some players as a way to show off to the crows.

If the ball is touched down correctly then there is technically no problem with diving, but if a player tries to show off and drops the ball then not only can it look rather stupid but it can also cost the team the win. Sometimes this is referred to as “show boating”. 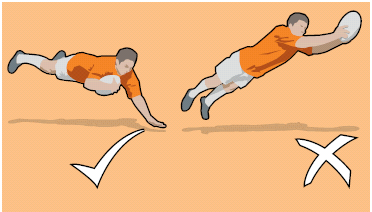 As you can see in the photo above, it is better to dive downwards rather than upwards. The reason is because when you dive downwards you have more control of the ball and therefore less chance of dropping it.

Also, when you dive upwards you are in a position where you have less control over your body, so when you hit the floor you have less chance of putting the required pressure on the ball to the ground for the try to be awarded.

Here is an example of a player being over-confident and dropping the ball in the process. Embarrassing. If the player had decided to safely place the ball down rather than dive with it he would have scored the try.

When approaching the line it is important to maintain your concentration so as not to lose control of the ball. Here is a tragic example demonstrating the importance of keeping a firm grasp on the ball when approaching the try line:

In this video notice not only the great footwork of Danny Cipriani but also the way he dives downwards when he scores the try. Not only does it look good for the cameras, but it is also a way in which there is very little chance that he will lose control of the ball.

As a player, when scoring a try you want to score your try as near to the posts as possible because the closer the try is made to the posts, the easier the conversation is for your kicker, which can result in your team gaining to extra points on offer.

This is especially important if the teams are well matched or if your team is having difficulty putting points on the board because of a strong defence. In such a case, kicking can be key to winning the match and the team with the most conversions and penalty kicks will have a better chance of winning the game.

Of course, if you have a very good and accurate kicker and you have confidence in their ability, then scoring a try in the corner is no problem.

Thanks so much for reading this article. See you next time!