A Look at the Television Match Official 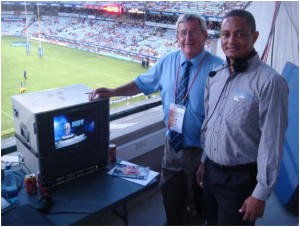 This month I will be looking the role of the Television Match Official (TMO) in the game of rugby. A referee can easily change the result of a match with his/her decision-making and the TMO assists the referees with making the right calls throughout the match.

On the right is a picture of a TMO with his view of the game and the screen he uses to make sure he makes the right calls.

If the referee is not 100% sure whether to award the try or not, he/she can ask for a video replay. This could be because he/she is not certain whether a player had gone into touch before the player put required pressure on the ball for the try to be awarded, or because a potential knock on may have occurred while the player was trying to ground the ball.

The use of Television Match Official (TMO) has been used in rugby union since 2001. Since the introduction of the TMO, the number of mistakes made by match officials has decreased significantly. With the success of instant replays being used in rugby union, other sports such as cricket, tennis and now football are also starting to use television replays to assist them with their decision-making. 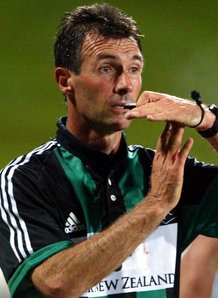 Although the use of video replays has improved match decisions, there are times when the use of replays is not of very much help. This is normally the case if the referee wants to know if the ball has been fully grounded for a try. The reason this is so hard to call is because of the amount of players in the same area trying to get the ball, which can result in inconclusive video replays with blocked views of the try.

However, the use of TMO’s has been seen by most as a major success in the rugby game by reducing bad decisions by referees and allowing the game to flow better. This has created better matches of rugby for those playing and also for the watching fans.

One the left is a sign that the referee uses to indicate that he would like to consult the TMO.

While in some sports like football the referee will face criticism throughout the match from both the players and fans, in rugby this is not the case due to a culture of respect and because of the referee having the option to look at video replays and being able to ask other officials whether a player should be sent off or put in the sin bin due to his conduct.

This is also evident by the ways players address the referee because in most cases the referee will have a microphone on his person, which means if a player has sworn they cannot deny doing so in the future.

This clip demonstrates difficulties that the referee may have when trying to contact the TMO, but generally the referee is able to get in contact with the TMO without much difficulty.

While many players and fans approve of the use of the TMO, it has to be remembered that not every professional game of rugby will be able to use video replays due to cost. Hence, only premier league matches and international matches use video replays.

Furthermore, there are always going to be situations where people disagree on a decision made by the TMO and there are times when replays simply cannot assist with making a decision, so the onus falls back on the referee to make the right decision.

1 Comment to A Look at the Television Match Official