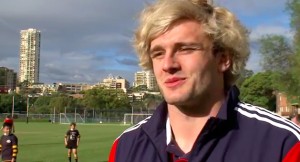 The British & Irish Lions visited Sydney Grammar School in Australia to host a coaching clinic with 11 and 12-year-old players.

Sydney Grammar School was the same school that was visited by the very first British & Irish Lions squad on the inaugural Tour 125 years ago in 1888.

The current Lions players presented the children with rugby kit before getting involved in a training session.

The lucky children spent the afternoon with a selection of the current Lions squad players, which included Matt Stevens, Alex Cuthbert, Ian Evans and Richie Gray.

The children were put through their paces on the training field before ending with a match with the players.

“I think the kids are teaching us how to play rugby rather than the other way around”, Matt Stevens said.