Find Rugby Now is happy to announce a new partnership with Emvale Women’s rugby and Sportswear, which will be showing off their great range of kit on the 6th of July at the FRNs 7s Tournament.

We are particularly excited about Emvale’s sponsorship of the women’s player of the match, which will include rugby boots, hoodie and plaque.

Emvale’s New Zealand designed kit has a range of rugby and sportswear designed just for the female shape.

Their philosophy is to provide a range that is stylish, affordable, and great wearing. This includes compression clothing, female specific rugby boots as well as shoulder and chest protection tops.

Their boots have had great reviews and have already been worn by top female players in the Six Nations Games and in the World cup qualifiers. 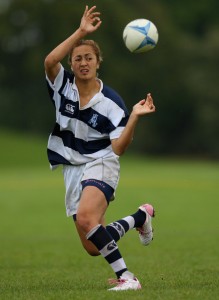 In addition to their great range of sports clothing, Emvale is also developing a range of team kit.

Details of this range will be announced in the near future, so stay tuned!

We’re excited about a rugby kit company that is focussed on providing quality products for women.

After all, women have different needs than men. Shouldn’t women have rugby boots and kit catered to these needs rather than always having to buy men’s kit in size small or extra-small?