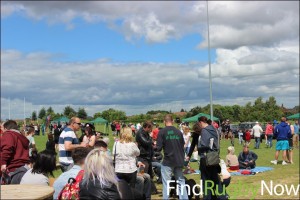 On Saturday, 22nd June 2013, the FRN 7s “Flair” team competed in the Milton Keynes Hemingway Rugby 7s Tournament, which featured 26 teams that competed in an open and a social competition.

This was Find Rugby Now’s first time participating in the tournament and we faced tough competition from Stowmarket Spartans, the Seven Dwarves and Old Columbans in the pool stage and then took on Tesco RFC in the semi-final of the Bowl.

With five new players in the squad on the day, our team got better as the tournament went on but struggled against more seasoned teams.

Congratulations to all of the tournament winners, which included the White Hart Marauders Academy (Shield) and Oxfam Crusaders (Cup). 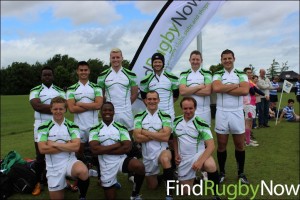 After taking part in a variety of festivals this summer season, the Milton Keynes 7s was a nice change as the focus of the tournament was very much on the rugby and not on ancillary entertainment or alcohol.

That being said, the tournament did have a variety of live music on the day on the Hobgoblin stage and some great activities for kids.

There was also some nice additions like a prize for the best dressed team on the day and also a prize for the winner of the Fastest Man in MK competition (for which every team volunteered their quickest players).

Since it was the first day of the Lions, the clubhouse was packed and provided a great atmosphere to be enjoyed in between matches for all of the players and spectators (as well as a cover from the occasional rain).

Players were also provided with access to a great physio at no extra charge and matches on a whole were held on time – a rarity at a rugby 7s tournament!

Food options were a bit limited but more than enough and there were some nice sweets and pastries on offer.

All in all, we enjoyed our first involvement in the Milton Keynes 7s and we will be adding it to our regular summer-time fixtures list.

If your team is looking for a competitive rugby tournament with a focus on rugby – this is one for you!

For those teams looking for revenge on the pitch, have a look at our FRN 7s London Tournament, which is coming up on 6 July 2013 at Bleackheath Rugby. We’ll definitely be looking for a rematch with our good friends, Old Columbans!

Posted on 22/06/2013 by Ellaine
Posted in Rugby Events, Tournaments and Competitions
Tweet