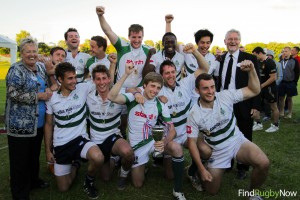 Last year FRN enjoyed a great day out at the inaugural East London 7s tournament. This Saturday East London RFC (ELRFC) will be hosting its 2013 tournament, which promises to be a great day of rugby for players and spectators alike.

FRN will be attending as the media partner of the event and will also be fielding our men’s and women’s 7s teams with the hope of bringing home some silverware.

Last year our men’s team made it to the semi-finals of the Trophy and we will be looking to improve on this performance.

For FRN the event is a great day in the calendar as it is a good opportunity for us to work with our friends at ELRFC and it is also marks our one year anniversary for our men’s team as East London 7s was the first event in which the team competed in 2012. 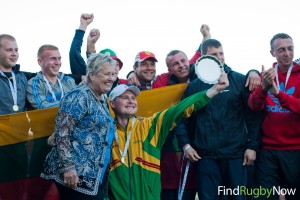 Lithuanians celebrating their plate win in 2012

This year’s event will include a set-up that is similar to last year’s with 20 men’s teams battling it out for three pieces of silverware – the cup, the trophy and the plate.

FRN is pleased to see that ELRFC has also added a women’s tournament, which will field 6 women’s teams, including an FRN side.

Similar to last year, the event will feature a small rugby festival with live music throughout the day, which will include the East End Promises headlining at 4pm (http://www.eastendpromises.com/) before the finals.

There will also be plenty of family entertainment, a huge Barrel BBQ , ice cream van and an outside bar for the adults.

Last year’s event included a very competitive men’s tournament where Old Johnians took home the prized cup trophy by beating Woodford in a competitive final. With last year’s winners being absent from this year’s tournament, who will be the new East London 7s champions?

In the division below, S&L Ravens came out on top with the trophy, beating Millhill in the final.

The plate was taken by clearly the most supported club at the tournament, Lithuanian Rugby, who have grown in strength over the past year.

A review and photos from last year’s tournament can be found here.

The day promises some great weather, so if you want to see some great rugby and enjoy a day in the sunshine, we very much encourage you to come down to East London RFC this Saturday.

Entry is free for all spectators and visitors from the local area and the wider rugby community are welcome to pop in to enjoy a jam-packed day full of fast paced, free-flowing rugby in glorious sunshine.

We hope to see you all on Saturday!