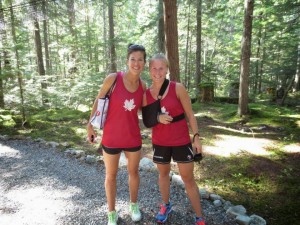 I have truly missed blogging. I have wanted to start writing again, but honestly, for the amount of things that I have to talk about, I didn’t have a clue what to say. I mean, I knew I wanted to write about my injury and my return, but it has all happened so fast I really wasn’t sure where to start!

I had been dealing with a chronic shoulder dislocation for some time. There was no explaining it, I was just sitting with a friend one day and it slipped out! I had no idea what had just happened. I sat calmly looking at my friend and my arm for a few minutes until it eventually slipped back in.

I thought it was odd, but just ignored it and got on with my day. It happened again a month later, then again, and then it started happening almost once a week consistently.

It never happened in training, mostly when I was completely relaxed. It was very strange, but I was very lucky. This was something that I could manage considering it never came out from a traumatic instant.

Eventually, I got an MRI that told me I had two tears in my Labrum (SLAP/Bankhart) and the tears had started to make its way up to my bicep tendon.

We then decided that we would manage the amount of strain I put on my shoulder while maintaining a full training schedule until after the World Cup, at which point I would then have the surgery. 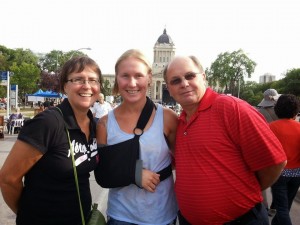 I had surgery on August 26th in Winnipeg. I was lucky that I was able to be home and I was able to spend the first 2 weeks with my family. I don’t think that I could have gotten through it or done as well as I did without them. They honestly were a godsend. I was not in a good place. I can’t even sugar coat it. 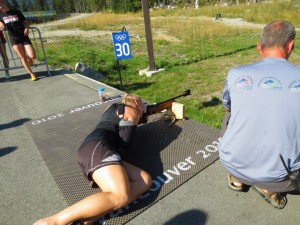 The first 6 days were the worst of anything I had experienced. I didn’t sleep well, my mom had to sleep on the couch next to me when I woke up to help me. I cried myself to sleep for the first little while (slept on my back for almost 2 1/2 months). I watched a ridiculous amount of Netflix, and I am pretty sure I got sick of being in my own company.

The worst was the pain. I just couldn’t do anything, or be comfortable without being in a lot of pain. When I was told that as soon as the anesthetic wore off I had to get my arm out of the sling and do this pendulum swing, I was terrified! I was convinced my arm was going to fall out of its socket, no lie. In the end it didn’t and I lived, but it was an event to get up and do that twice a day.

Once those terrible 6 days were over, everyday was noticeably better. I had ups and downs, but because everyday I overcame something, no matter how small, it was a victory and to me, I was winning.

The part that I had a love hate relationship with was that once it got easy it only got harder.

The first time that I took the sling off and Adrienne said to me that we have to start moving it, I didn’t know what I was in for. I cried, I was shaking, I swear I was in shock…the pain was excruciating. It literally put me out for the rest of the day.

I would go home, wake up, feel fine, and then go in to do it all over again. Just when you thought it hurt less, you have to push a little further…and there it is, that ridiculous pain that open up the flood gates. I haven’t ever cried that much! But they were good tears. Progress tears. 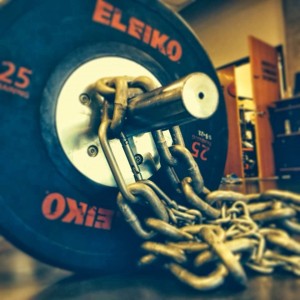 It got to the point where every week I could do something else, a little more, and I had the amazing encouragement of the team surrounding me. They made this easy. They made it easy to show up everyday with a smile on my face and realize that no matter what I was able to do, or not to do there were opportunities.

Like being a better student of the game, being able to learn parts of the game that were not my strong points. I started to re-evaluate the hard work it takes to play and perform at the level that we currently do, something you don’t realize till it is taken from you.

It was a great reminder for me, and gave me that push to go beyond limits that I hadn’t yet reached or had to face.

This wasn’t an option for me, this was a mind-set. It was about showing up every day to be better than I was the last.

I never made excuses and always did what was asked of me. Sure I had a lot of questions, and I had a lot of concerns. But I trusted the program and the amazing people that were working with me. We were always on track, or just ahead of the game, which for an athlete is exactly what you want to hear.

I said to myself half way through that the rehab was the easy part, it was going to be returning to play that would be hard. I had a fear of stepping on the field and forgetting everything. I was scared that I wasn’t going to be the same player, and may never get selected to play again. I thought that I was going to let the team down if I didn’t perform right away, and I had moments where I thought that if I hit someone or someone hit me, I wasn’t going to get back up…

Getting Back to Playing

My experience so far has been that yes, the return to field play is hard. There is no fitness like game fitness, nothing can prep you better than a game. Sure my skills are rusty, but they are definitely improving. 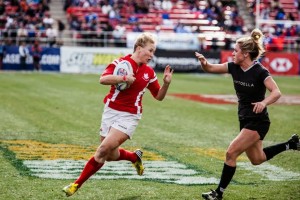 Stepping on the field I was hesitant in what I saw and called, but no, I haven’t forgotten anything. In contact, my arm is still in tact and I have gotten up many of times after a number of grueling hits playing the Shawnigan Lake boys and it doesn’t get much tougher than that.

So over all, I would say that I built up a lot of stories in my head and what it came down to was a small reminder from a really close friend of mine, teammate Jen Kish, I just need to have self belief.

I need to have not just self belief but trust in the work that I have done to get to this point. This isn’t my first Rodeo. I have experience, and like muscle memory that wont let me down.

I have been told this by a lot of people who have given me a very helpful encouraging words over the past months.

If you are ever in a situation like this where you second guess yourself, go back and look at the evidence. Re-watch old games or highlight reels. It reminds you that you have the ability, so don’t forget it. 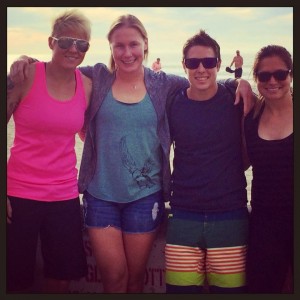 My return to play date had been pushed back a few times which for me was emotional and defeating. I had mentally prepared myself for what I had thought was a pretty realistic attainable return to play.

It was, but we weren’t going to rush this. I hadn’t went through all of this to set myself back just because I was impatient and wanted to play. So I mentally prepared to not only be fit to play, but be performance fit to play. New goal, new mind-set.

Little did I know a week later I would be put through the paces, and do my return to contact skills and get asked to go to Las Vegas 7s. Naturally I was nervous, and a little frightened, but I was not passing up that opportunity! I got to gain some confidence and get some conditioning in.

A few days later I was on the roster that was asked to go to Atlanta 7s. I guess a little patience and trust in the process goes a long way. In the end I did return when I had originally hoped.

I have missed the girls, and being back and able to be apart of this team is all I have thought of for 5 months. It is what I have worked for, and put in the extra time for.

I know this might sound weird, but I am proud of myself. Sure I had some really low points, broke a few times, but over all this has been a great challenge to say that I have over come. I am stronger for it.

I was in a situation that I had no control over, and it was the people surrounding me that made me feel grateful for what I have.

I want to thank you all. I can’t even express my thanks enough, the message wouldn’t do my thanks justice. Just so you know, I truly appreciate everything!

Mandy Marchak is one of Canada's most successful rugby players. She has been involved in many tours with both the Canadian women’s 15s and 7s teams, including the 2009 7s World Cup in Dubai and the 2010 15s World Cup in England. To date, she has 35 caps for the Canadian 15s team and 17 caps for the 7s team. She is also a Saracens player and enjoys playing social 7s with the Moody Cows and Storm 7s in the summer months. View all posts by Mandy Marchak