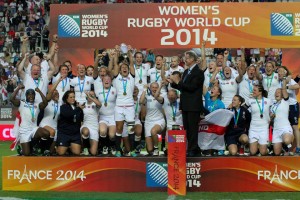 The English women were able to achieve their hopes and dreams last night when they defeated Canada 21-9 to become the World Champions at the 2014 Rugby World Cup.

England are world champions again for the first time in 20 years, but beyond the team’s individual fantastic effort there has been a clear winner at this year’s Rugby World Cup – and that is women’s rugby.

I had the pleasure of watching this tournament in the company of a variety of people and the consensus was clear throughout the whole tournament – the skill and quality on display was impressive.

Let’s face it. Women’s rugby had a lot to prove. I watched most matches surrounded by my male friends and with every kick that Scarratt or Harvey took I felt relief when the kick went over as if I myself was being tested as a woman’s rugby player.

“Wow. I couldn’t convert that kick”, my male friends would say when the ball glided comfortably past the posts.

I felt like saying to them “Of course you couldn’t. These are professional athletes playing at the highest level of their game.”

Only these aren’t all professional athletes. Most of the girls are not being paid to play. They are playing at the highest level on an international stage despite their amateur status and lack of financial support (as one of the commentators painfully reminded us “with the greatest of respect” during the final). 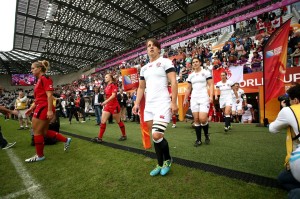 These ladies have sacrificed their lives in order to put their dedication to the sport (and their country) first and foremost in their lives.

Yet all of the players performed beyond what could reasonably be expected of them and put on what can only be explained as heroic and supernatural performances.

And as a result, their performances have raised the bar for women’s rugby. They have changed people’s opinions of the sport, raised some eyebrows and inspired more women to get involved/stay involved in rugby.

In a sense, the World Cup has surpassed all expectations and yet those of us who have seen the women’s teams progress over the last four years have always known that they were capable of achieving such a standard.

The quality of the semi-finals and the finals were a real testament to how far the game has come in the last four years. The biggest differences that stood out for me were (1) precision and execution of skill; (2) pace of the game; and (3) accuracy of kicking.

“Imagine what can be done in three years”, Mandy Marchak (Canada International) remarked on twitter, “the thought of how much further the women’s game will progress from now is exciting!”

And that is really what it is all about. Women’s rugby has taken a massive step over the past few weeks thanks to the hard work and dedication of all of the ladies that played in the World Cup and we thank them for it.

I feel that I no longer need to defend women’s rugby to my ignorant/misguided friends.

I will simply refer those who have not had the pleasure of seeing this great game to the latest 2014 World Cup videos. Imagine all of the time I can save arguing…I think I will head down to the local rugby club to practice my kicking instead.