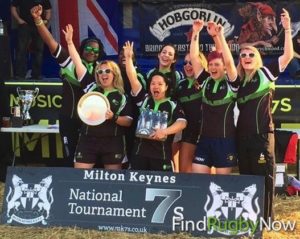 FRN 7s Invitational Woman’s Team won the women’s open competition at the Milton Keynes 7s Tournament on 18th of June 2016, taking home a tournament trophy and £250 along with the fastest woman of Milton Keynes trophy for the efforts of one of its players.

The FRN men’s team also put on a worthy performance making it into the Cup quarter-finals and having one of its players earn second place in the MK fastest man race.

The FRN 7s women’s team has had strong results in the 2016 season having won the Bury St Edmunds 7s Tournament, coming in as runners-up in the Charlotte Lloyd Memorial 10s and finishing 3rd in the Majorca Beach Rugby Tournament.

“We had some incredible pace in the team as well as some powerful forwards, which made us a well balanced team both in attack and defence. We only had one try scored on us all day, which I am particularly proud of!”

The teams results were as follows on the day: 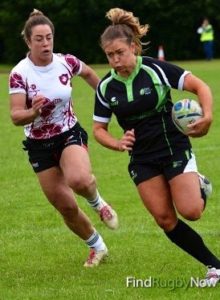 Having won Milton Keynes 7s, the team has qualified to play in the Women’s Regional Play Offs on 10 July at Allianz Park where they hope to put out a strong squad that will include some of the players that helped them deliver such a strong performance at Milton Keynes 7s.

The top two teams from the Play Offs will qualify to attend the National Finals on 24 July at Osea Island.

If you would like to play for the the FRN 7s invitational 7s teams, please email sevens@findrugbynow.com.