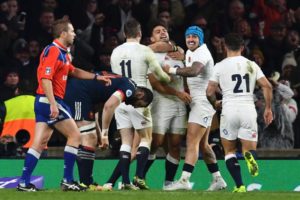 England’s problems are at 7, 12 and Itoje! If Itoje is to play at 6 and run amok he needs inside backs who can build pressure, not kick ball away under pressure.

Successful back line attack should always have the 7, 8 and 6 running forward in support or to the tackle contest. Ford and Farrell cannot produce this!

Ford badly needs Matt Toomua outside him next season and Toomua is at Leicester! Until he plays with a dominant 12 who has a running game Ford will remain on his current plateau, which is way below his potential.

Quick ball from the breakdown, accurate passing, hard running, composed finishing got England home. Care, Farrell and Teo fulfilled that role. Can Teo give the play width is another question, but Farrell is better at 10 and England’s reliance on culture demands his selection (He kicks goals…regularly).

Wood ticks every box relating to effort! But as a technically competent 7 barely one. In the 16th minute he received a bad French line-out throw and set off running. He ran straight into a defender and went to ground, no footwork, hit and spin, hit and pop, stay on your feet and drive on, make the ball available…nothing.10 minutes later 15 meters out from the French line he dives over the ruck from quick ball!!!…penalty to France.

I would have Wood in all my squads because he will keep everyone else honest! But England is not producing 7s, or am I missing someone? Or is anybody working on ball jackling with 12 year olds? It’s a must do?

France exposed England’s inability to deal with close quarter support play and ball into contact off-loading techniques (come to think of it when I attended all England’s training sessions in Sydney, I can’t recall seeing any such practice). Itoje also has lazy arms when attackers step inside him. Under the new tackle laws he will be vulnerable. Under the current selection he looks more at home in the second row.

Australian coaches don’t lack courage when it comes to making changes so England may have a new team and a new approach for Cardiff.

A more prescriptive 1st phase and greater use of the wingers in mid-field off second phase could be used. To that extent I would pick Nowell. He’s a go–forward player, especially in tight situations. If the Welsh back row are tied up England can profit. Daly may also offer a selection option at 12, but maybe not at the start of the game?

Can some of my English coaching friends who are forwards please explain how the Australian referee viewed scrum infringements??

Finally do England’s forwards look heavy and sluggish? Appetite is more about wanting to play rather than wanting to eat. Something is not quite right up front?????

If you need some distracting in the meantime, play slots at Wintingo, the Wintingo online casino.