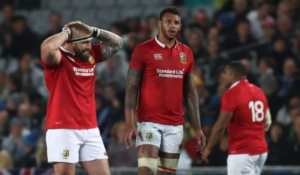 Having watched the Lions v Blues game, which is the second match of the 2017 British Lions tour there are a few things which worry me about the performance of the British Lions.

Firstly, the much mentioned “Warren-ball” approach seems to be the go-to approach. In a squad which contains some of the best finishers and line-breaking centres in the Northern Hemisphere, the approach seems to be not to get them the ball, but to power / smash it up the centre of the park. I am not sure this is the right approach because whilst they made ground they really never looked like they were going to break the line and score with this approach.

Secondly, it appears that players cannot adapt on the pitch. The approach mentioned above (which resulted in 54% possession and a larger territory percentage than that of their hosts) still didn’t see any result in terms of open play gain-line breaks.

I would have expected a team full of international players to adapt to what is happening on the pitch rather than following one approach all game.

Thirdly, the reaction after the match from the coaching staff seem at ease with their performance. Based on this reaction it is likely that the Lions are going to get mauled. The Chiefs, who are next up, will be a tougher challenge and unless the squad find a way to “play” rather than follow a pattern then I’m struggling to see any more games in the tour where they might win.

So what’s the problem? Personally I think the coaching team are at the heart of the problem. They seem to have a set and very well documented approach. I’m not for one minute saying that they are not very successful coaches but I think they have stopped looking for new approaches and are stuck in a rut. This might be fine if they were winning but teams will work you out and adapt and unless you can too you will be left behind.

In the two games on the tour so far the scratch barbarians team looked like the better team and the Blues wanted the win more and played what was in front of them.

Maybe Gatland and his coaches have a master plan (as a fan I certainly hope so!) but I am far from confident of that at the minute.

WHAT DO YOU THINK? Let us know in the comments section below.