A Guide to the Autumn Internationals

The Rugby Autumn Internationals are just around the corner and FRN is here to let you know all of the matches coming to you over the course of the next few months including a schedule of events and match details below as well as details about how you can gain access to Twickenham Hospitality Boxes.

England will play four Autumn International matches at Twickenham in November 2018, which are being branded for the first time as the “Quilter Internationals”.

What is worthy of recognition is that this is the first Principal Partnership to cover both the men’s and women’s teams’ autumn matches.

All matches kick off at 3pm and can we watched live on Sky Sports.

When the fall leaves return so does the exciting prospect of the Autumn Internationals at Twickenham, which is one of the most anticipated times of the year for English rugby.

The Autumn Internationals provide an invaluable opportunity for teams to test themselves against the world’s strongest rugby nations and see how far they have come.

This year’s competition will be an especially important time as teams begin solidifying and focussing their squads in their build up toward the next Rugby World Cup, which is being held in Japan in September-November of 2019 (Asia’s first Rugby World Cup). 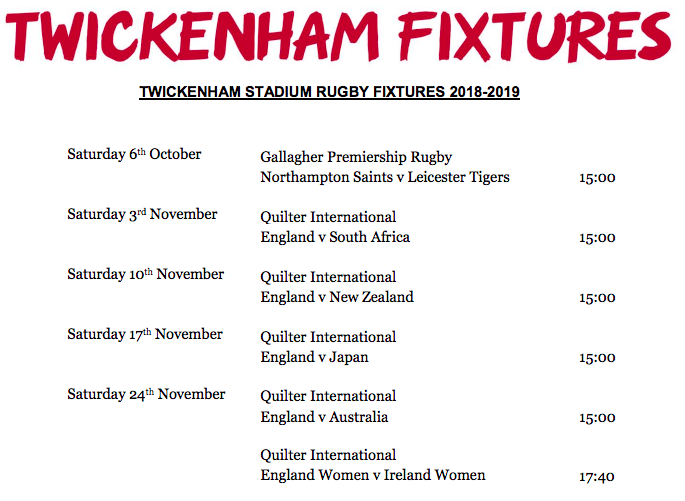 The series will kick off on 3 November with England playing the Springboks.

Although South African rugby has arguably suffered some set backs over the last few years, England lost the three-test series against the Springboks in June 2018 with South Africa winning the first two tests and England winning the third in Cape Town. This third match win was England’s fourth test win in 16 attempts in South Africa – and their first in Cape Town.

England and South Africa played a total of 41 test matches since the first match was played in 1906. South Africa have won 25 of these encounters.

The Springboks will be aiming to come in strongly with intent to show that England’s previous win was a fluke. This should be an entertaining match.

10 November 2018 will be the first time that England will play New Zealand since 2014 where England narrowly lost to the world champions by a score of 24-21.

England and New Zealand have played a total of 40 test matches since the first match was played in 1905. New Zealand have won 32 of these encounters. Let’s see if England can impress and bring its winning tally up!

This will be an oversubscribed match given the prestige of the All Blacks team so we recommend you buy your tickets as early as possible.

Following their courageous performance at the Rugby World Cup, Japan has gained a lot of followers worldwide.

17 November will only be the second time that England and Japan meet in a rugby test match. The last match took place at the Rugby World Cup in 1987 when England beat the Cherry Blossoms by a comfortable margin of 60-7. However, the Cherry Blossoms have come a long way since those days and it will be exciting to see what they have to offer.

Given that Japan will be hosting the next Rugby World Cup in 2019, this will be a great opportunity to see what the hosts will have to bring to the table next year.

On 24 November, England will play Australia in what will be a vital match to England as it will demonstrate how the team has developed over the course of the Autumn Internationals and where they stand relative to one of the best sides in the world.

England will be looking to repeat their performance from last year when they comfortably beat the Wallabies 30-6 at the Autumn Internationals.

England and Australia have played a total of 49 rugby test matches since the first match was played in 1909. Australia have won 25 matches and England have won 23 of those matches (and one draw), so their results are pretty even historically. Let’s see if England can narrow the margin.

If you want to elevate your trip to the next level and are interested in snagging yourself a special day out at Twickenham, get in touch with Keith Prowse at this website to arrange a special package for you and your friends, family or colleagues.

Prices starts at around £350 per person +VAT. The England v All Blacks packages are already sold out, so act fast so you don’t miss the others if this is something you are interested in!