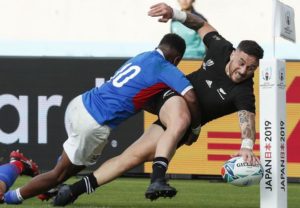 As we embark on the new year, we leave behind some great rugby moments from 2019. Undoubtedly a majority of these took place during the 2019 Rugby World Cup in Japan, which delighted audiences with surprising wins and gut wrenching losses that included some very entertaining tries.

We wanted to look back at the top ten best tries from the 2019 Rugby World Cup and since World Rugby published their top 10 tries, we found this to be a pretty solid (albeit still slightly controversial) list for us to review.

Top 10 Tries from the RWC

10. Josh Adams (Wing, Wales) – Wales v Fiji – this definitely deserves a spot on this list with the incredible hand off and behind the back pass from Jonathan Davis (something you would expect from Fiji themselves) before a stunning finish that is just centimeters away from being in touch. Some great awareness by Josh Adams and a phenomenal finish, which shows why he is a world-class finisher.

8. Kotaro Matushima (Fullback, Japan) – Japan v Scotland – Japan wowed audiences throughout the Rugby World Cup with their skill and bravery and this phase of play demonstrates exactly why. Great vision, great skill and great execution by a series of the Japanese players which gives Matushima a relatively easy run in. Particularly impressive one-handed pass from winger Kenki Fukuokathat deserves praise. Japan went on to beat Scotland 28-21 in a historic win that led to Japan being the first Asian country to qualify for the quarterfinals in the history of the tournament.

7. George North (Wing, Wales) – Wales v Georgia – downfield kick by Georgia received by Tomos Williams who does well to beat three defenders before doing an overhead pass to George North who dodges and powers through the defence. Not sure this try would be top of our list but some good running by Wales.

6. Marika Koroibete (Wing, Australia) – Australia v Georgia – some great reaction by Koroibete following a bit of messy ball. His change of pace here is incredible as he creates this try out of thin air and as the Georgian defenders literally fall all over themselves trying to stop him.

5. Cobus Reinach (Scrumhalf, South Africa) – South Africa v Canada – some amazing individual brilliance demonstrating why Reinach is one of the best scrumhalves in the word putting Canada under attack with ability to read the game, his speed and kicking ability. This one is impressive.

4. Kenki Fukuoka (Wing, Japan) – Japan v Scotland – Japan makes another appearance on the list, this time with Fukuoka (who assisted with Matushima’s try above). The lead up to this try shows exactly how Japan’s aggressive defence gave them the edge over Scotland. Aggressive defensive line speed leads Fukuoka to strip Scotland of the ball and capitalize with his impressive speed. Fukuoka is a beast!

3. George Bridge (Wing, New Zealand) – New Zealand v South Africa – this try shows the All Blacks at their best – an impressive across-the-pitch kick to the winger followed by some great passing, a powerful run by flanker Ardie Savea and then some great skill, offloading and team play ending in a try by Bridge that was contributed to by the entire team. This is one of the only four tries scored against South Africa in the entire tournament.

2. Keita Inagaki (Prop, Japan) – Japan v Scotland – Japan makes the list for the third time with this try from prop Inagaki does a great job of being in the right place after a series of great offloads from his teammates and finishes right in the middle of the posts. Not sure this deserves to be number 2 compared to some of the other wonderful tries but this try solidified Japan’s historic win over Scotland so must be viewed with that in mind.

1.TJ Perenara (Scrumhalf, New Zealand) – New Zealand v Namibia – Unsurprisingly New Zealand finished top of the list with this unbelievable try. This has everything – great running inches away from the touch line, behind the back pass and nail biting finish that had even Perenara questioning himself. This is world class.

Check out all of the tries here: 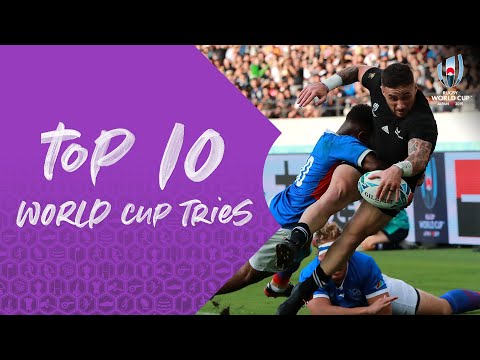 Interestingly, almost all of the tries selected above were scored by Wingers with an honourable mention for two Scrumhalf tries.

Japan featured most prominently with three tries from their match against Scotland being selected. New Zealand was the only other team to be chosen for more than one try.

All of the tries selected were also scored by Backs apart from one try scored by Japanese prop Inagaki (try 2 above), which was scored in that same match against Scotland.

Judging by the list above, the Japan v Scotland match was really one not to miss! 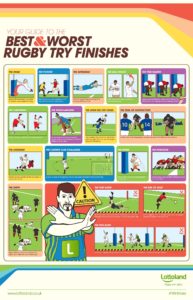 Do you agree with the list above? What tries are missing from this list that you think should have made the cut? Do you think the Peranara try deserves to be top of the list?

What about tries that were omitted – do you think that the South African 50m maul deserved a place on the list?

How many of these tries can be found featured in Lottoland’s rugby try guide?

We look forward to more exciting tries like these in 2020!