2019 was a great and exciting year for rugby with some very important moments that transcended beyond the rugby field and the rugby community. 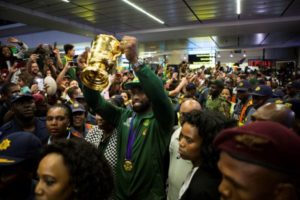 If you can’t relate to the statement above, just have a look at some online videos showing how many people gathered at the Oliver Tambo airport in Johannesburg, South Africa to welcome the Springboks home after their Rugby World Cup win.

The Springbok win was one of the most memorable moments of the year – not just in rugby, but in all of sport. The pure joy and raw emotion that was shown by Springbok fans as Siya Kolisi walked through the arrivals gate hoisting aloft the Webb Ellis Trophy is enough to make the hairs on the back of your neck stand up. And the roar of the waiting crowd, which came from a place of deep pride, is enough for anyone to be left with a lump in the throat.

As the late Nelson Mandela said, “sport has the power to change the world“, and rugby has helped change the course of South Africa, yet again.

Check out some of the key moments of that unforgettable Rugby World Cup final here:

What a performance. What a team. What a moment.

The @Springboks become champions of the world! 🏆🙌 pic.twitter.com/MXA0p8KZYY

England Rugby Defeat the All Blacks

In 2019 there were also some wonderful storylines made by Eddie Jones’ England rugby team who had a meteoric rise in world rugby culminating in a once in a decade performance where they steamrolled New Zealand in the semi-final. This highly awaited performance will echo for a long time to come with youngsters all around England and gave a new confidence and pride for devoted England fans around the country.

Although it wasn’t to be in the final, captain Owen Farrell and his team made the nation proud and shook the rugby world for 90 minutes starting with a controversial haka response that was highly debated for weeks to come. There is no doubt that they will be back in 2023 more determined than ever.

Sadly not all of the events from 2019 have been as positive, but what has been incredible is to see is how the rugby community has rallied around the Leeds Rhinos legend.

Towards the end of 2019, the rugby world received some terrible news as Rob Burrow, former England professional rugby league footballer, was diagnosed with Motor Neurone Disease.

Allegiances have been put to one side as clubs around the Super League have generously donated to Burrow as he begins his battle with the disease.

You can see a response to the news from Bradburd Bulls Head Coach, John Kear, here:

Best wishes from everyone at the club to Rob and family, the Rugby League family stands by you. pic.twitter.com/5dk1leWNul

We can expect that the Leeds Rhinos will dedicate their next season to the inspirational hooker and, even though they now look to be behind in the latest rugby league odds to win another Grand Final, don’t rule out the power of determination as the West Yorkshire club do everything they can to put a smile on Burrow’s face.

At some point over 2019, rugby, whether it be union or league, has brought us all to tears.

What rugby giveth, it can also taketh away. Thank you 2019, please continue to give us more hope and joy in 2020.