Unfortunately my season is over for another year since we (Rotherham Titans) didn’t make the semi-finals of the Championship playoffs. So what does a professional player do over the so-called off -season? I think most people’s perception is that we go on a two month holiday in the sun (I wish!).

Firstly, it is a time when a player will evaluate how successful one’s season has been as a team: where has the team come in the competition, what cups/competitions were won, and whether the team reached its potential. As an individual, you also analyse whether you have reached the goals you set during the season and where you could improve. A lot of players will know what their plans will be for the next season and have their contracts sorted out. On the other hand, it can be a nervous time for a lot of players trying to sort out new professional contracts. Luckily for me, I have signed up for Rotherham Titans for another year and am looking forward to building and improving with them!

In my more youthful days my brothers and I and some school friends entered different 7s tournaments during the summer. It was ideal for keeping our skills and fitness up, and it was great craic with friends over the off season. We were also lucky to be able to travel with our team to tournaments overseas!

I highly recommend putting a team together with friends and club mates. There are always social tournaments going on near you. If you are in London, I encourage you to check out the FindRugbyNow Events Page. If you would rather be a spectator that is great fun as well – Sevens is always a great festival-like day out as a spectator!

I am fortunate enough to play with a young and upcoming 7’s professional who will be playing for Samurai International in the Super 7’s Series. I have asked him, Ed Tellwright, to write about his experiences and the changes he makes to his training methods to prepare for the Super 7’s Series.

Big thank you to Ed and wish him the very best for the sevens! 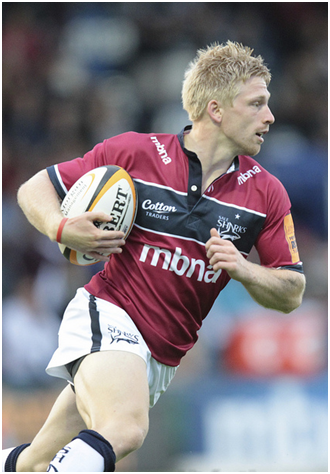 Ed Tellwright on the move!

I have been playing rugby since I was 15 years old, which for most players is quite late. I started off playing for my school and local side with a bunch of friends, which quickly propelled me into County and Academy set-ups in my home town of Bristol. Following my years at school, I attended a rugby academy in Queensland, Australia, and played three years at the University of Wales Institute, Cardiff (UWIC). The success of my university team aided my progression within the game and since leaving university I have played at Sale Sharks and this past season at Rotherham Titans with Pale.

I started playing 7s properly in 2010 when I debuted for North Wales Exiles at Manchester Sevens. Success at this tournament prompted a selection for the Great Britain student’s Sevens team and Samurai International, which is run by Terry Sands. It was a great experience when we got a Samurai victory in the Middlesex Sevens!

Differences between 15s and 7s

As we come towards the end of the 15s season and the start of the 7s, many players like me are trying to make the transition from 15s to 7s. Rugby 7s is a shorter, faster and arguably more entertaining version of the full game.

Each team is allowed seven players on the pitch at any one time from a squad of twelve, with only three from the five remaining squad members allowed to interchange.

Depending on the specific tournament rules, substitutes can be rolling or not. This results in a much more broken-field style of play than 15s with room and space to create patterns of retained possession and passing that leads to scoring opportunities as gaps open up between the opposition players.

Each match consists of two 7 minute halves, apart from tournament finals which are generally extended to 10 minutes per half. This means that the pressure to outperform the opposition is there from the get-go and 14 minutes flies by extremely quickly!

Tournaments usually run a group system with 3-4 teams per group, resulting in 2-3 group matches, quarter-finals, sem-finals and a final depending on how many teams enter. There is often a plate, bowl and shield competition for teams that do not make it through the group stages, allowing for all standards of teams attending the tournament to get plenty of game time.

Following a try, conversion attempts must be from drop goals, and the scoring team also kicks-off again, whereas in 15s the scoring side receive the ball from a restart. Yellow cards (sin bins) only last for 2 minutes and the timing of the sin bin will start from when the player enters the technical area at the side of the pitch. A yellow card in sevens is a massive disadvantage to a side – often swaying the result in the other team’s favour much more so than in 15s.

In my opinion, training and preparation for sevens requires a different attitude than preparing for a season of 15s. The fast paced nature of the game suits almost all back and back row positions. Occasionally a quick, mobile hooker will also be brought along for more physical encounters. As backs are more suited to the game and there is more space on the pitch, the emphasis in conditioning sessions should be more towards speed and agility rather than size and strength.

Power movements in the gym such as the power clean, snatch and jumps are ideal methods of improving speed and power. Lower reps, around 3-4 for 3-4 sets at approximately 85-95% 1RM is ideal. SAQ (speed, agility and quickness) drills will also improve your game play on the pitch possibly giving you the pace to get past defenders.

Anaerobic fitness is also a vital aspect of the game as you will find yourself running at almost full pace for large periods of the match. Short shuttles completed at pace in a small time frame with reasonable rest between sets is a good way of improving your anaerobic fitness.

Training your individual skills is another vital aspect of sevens. The increased distance between players means that passes need to be accurate in order to give the outside men the best advantage possible. 1 v 1 tackling skills must be exceptional as any line break will almost certainly result in a try!

Finally, communication between players is key to a successful side. Often you will find yourselves outnumbered in defence and communication from your inside defender letting you know he has your inside covered allows you to push onto the next/ last man to prevent overlaps.

Women’s sevens is gaining in popularity with the England women’s team only beaten last year by the NZ women. The level of skills and professionalism shown by women’s teams is a huge attraction during tournaments.

The amateur and national sevens season runs predominantly from the end of March through to the end of the summer. There are plenty of overseas opportunities with many invitational sides looking for opportunities for success. The biggest tournaments are run in Hong Kong, Amsterdam and the Super Sevens series in the UK.

Sevens is a fast growing and increasingly popular game for players and spectators alike. It is fast, thrilling and entertaining with teams scoring many tries in the short time that the matches allow. I encourage you to try it!

By: Pale Nonu and Ed Tellwright

The Marriott London 7s are coming up this weekend at Twickenham. Come out and see some incredible mens and womens rugby. We have an FRN exclusive discount just for you and some sneak previews coming up later this week!

Posted on 08/05/2012 by palenonu
Posted in Ask a Rugby Professional, Rugby Sevens
Tweet

Pale is a professional rugby player for Rotherham Titans, where he plays as a centre. Rotherham Titans snapped up centre Pale Nonu from Launceston where he made 22 starts. Rotherham boss Andre Bester said: "I've seen him and he has been a stand-out player, he smashed people...he's a very good ball carrier and will be just what we want, bringing a lot of experience to our midfield." Pale, whose brother is New Zealand All Blacks centre Ma'a Nonu, was previously with Mounts Bay before joining Launceston in July 2010. View all posts by palenonu