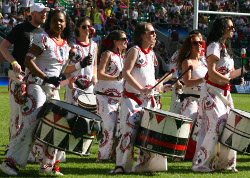 Exclusive tickets offer for FRN members: This link provides a deal on individual days (£5 off all adult prices) and weekend passes for £20 (instead of £35).

Twickenham Stadium opens its doors to the world’s finest rugby talent for the London Sevens on Saturday 12 and Sunday 13 May 2012.

Last year’s beach themed event saw more than 100,000 fans head through the gates over the two days including a record breaking 54,612 crowd on the Saturday. The 2012 event promises to be bigger and better with the London leg being the final event of the HSBC Sevens World Series.

The party atmosphere generated by the fans in the stands is almost unrivalled in the Twickenham calendar and with fancy dress galore, coupled with exclusive competitions and unique entertainment. View the entertainment page to see what else you can expect from a day at the London Sevens. For a bit of inspiration, or to find out what other fans are up to, take a look at the fan photos on the London Sevens Facebook page.
A drumming band perform at Twickenham

The tournament is part of the HSBC Sevens World Series, a competition that pits the finest national sevens sides against each other across nine different tournaments. Each nation scores points based on their performances in these competitions until the season ends in London and one team is crowned as the World Series champions.

Tickets are available now via our ticket page and start from just £18 for adults and £5 for juniors. There are also a number of savings to be had if you come with your mates (groups of 10+) or buy weekend tickets, visit London Sevens Website now for details.