Welcome to the first blog of the “Coaches Corner” blog! I am a sports journalist with a passion for rugby and throughout these blogs I will introduce you to different rugby rules, in the hope that you will gain a better understanding and love of the game. I will start with more basic rules and move to more complicated ones as the blog progresses.

The first rule that I will be looking at in this blog is the most basic rule in rugby union, which is that the ball cannot be passed forward.

What is the forward pass rule?

The rule means that a player with the ball can only throw the ball to a teammate who is either behind or in line with him. If the referee deems the ball has been passed forward a penalty will be awarded to the opposition.

What is a knock-on?

The same principle applies even when players are not passing the ball. If a player fails to catch or pick up the ball cleanly and it travels forward off a hand or arm and hits the ground or another player, it is called a knock-on. A knock-on can also occur if a player is tackled, lets go of the ball and the ball goes forward.

It is important to note, however, that if a player fumbles the ball but catches it before it hits the ground or another player it is not considered a knock-on.

When a forward pass occurs, the referee will move his hands in front of his body. Then he will pretend to pass an imaginary ball forwards. He will award the scrum put-in to the team that did not make the forward pass mistake. 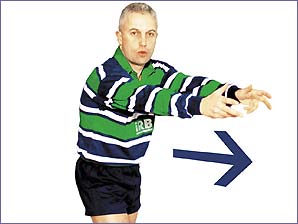 When a knock-on occurs, the referee will also stop play and award a scrum to the team which has not knocked-on. The referee will raise his arm at head level, with the palm of the hand open and tap the palm of that hand with the other to show the players that the ball has been knocked forward. 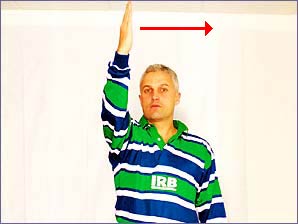 Application of the Rule

In nearly all matches there will be a forward pass or a knock-on, which can deny a team a vital try and change the outcome of a game.

If the ball is thrown forward at a line-out, a scrum is awarded 15 metres in from the touchline.

If the referee decides a player has intentionally knocked on or thrown the ball forward, a penalty is awarded to the other team.

And if the referee decides the other team would have scored a try if the intentional knock-on had not taken place, a penalty try is awarded.

Why Do Forward Passes Occur?

Some players that are caught throwing a forward pass do so to try and gain an advantage. Other players simply misjudge the pass, weather conditions (strong wind or rain) or the position of their teammate. 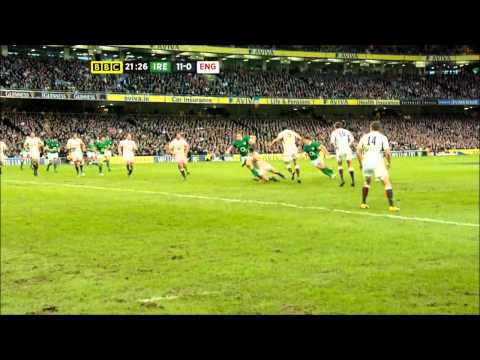 The exception to the knock-on occurs when the opposing player charges the ball down from a kick, or if a player drops or fumbles the ball and the ball ends up up behind them. Charged down tries are always exciting to watch as a fan and there are plenty of incidents where tries have been gained from kicks being charged down.

How to Avoid It

Finally a way to get around the forward pass is by throwing a delayed pass. This involves the player throwing a lengthy pass and letting his teammate run onto the ball at speed. This requires perfect timing and mistiming the pass can lead to a knock-on and the team losing possession. The perfection of such a move takes a lot of practice and requires both the passing player and the runner to know each other’s technique well (the speed of the receiver and the strength and destination of the pass by the passer).