Invest in a Women’s Side: Hackney’s Success

Setting up an entirely new rugby team is no mean feat – especially when we’re talking about the under-funded under-publicised world of women’s rugby. FindRugbyNow talks to Morgan Whitlock, coach of Hackney Ladies Rugby team, to find out just what it takes to bring an entirely new women’s side to life. 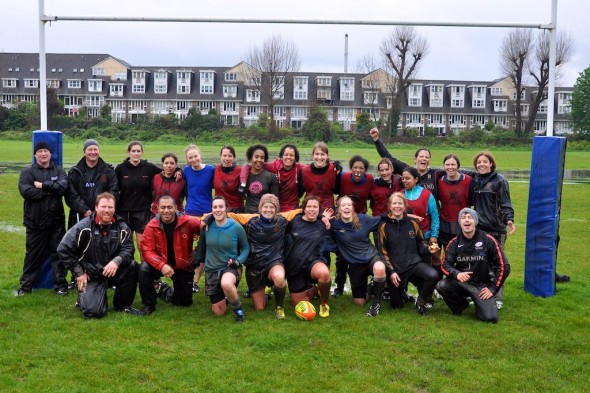 Hackney RFC, one of East London’s most established teams, entered unchartered territories in 2010 when it formed its first ladies side in its fifty year history. After a year of friendly fixtures and intense development, the team finally made its debut in the RFUW NC London 3 league this season.

Hackney Women’s Coach Morgan Whitlock revealed that having a ladies team was an aspiration the club had harboured for a significant period of time.

“The club has wanted to establish a women’s side for a number of years. We work hard to be a totally inclusive sports club, and if you’re not offering women the chance to play rugby you’re excluding 50% of the population. In recent years we’d had one or two women players join us for tag rugby in the summer, but never managed to convert that initial interest into a team.”

The catalyst for finally establishing an official team came in the form of four friends, several of whom had played together at university before moving down to East London after graduation. The determined ladies approached the club, who were delighted at the chance to finally establish a women’s side, and so the recruitment drive began.

“There seem to be two clear ways people find the club: word of mouth and online,” said Whitlock.

“We encouraged the founding four members to get anyone they knew along. Flatmates, friends, friends of friends, sisters or anyone else they could think of. To make sure no one was put off at the initial training sessions we kept them fun and basic, with a limited amount of contact.”

“Online we didn’t just use the website, we also made sure the club was included anywhere people go to search for local sports clubs, put adverts on gumtree and sent press releases to every local news-site we could find. And of course there’s Facebook – which combines the two and has been a really useful tool.”

Hackney RFC have also held several ‘women’s development days’ at their local ground, inviting experienced players and coaches to hold informal, fun sessions with girls flirting with the notion of getting involved with rugby.

But financially, the commitment to setting up the women’s side, affectionately known as the ‘Gladies’, has proved costly for the club, although it was an investment they remain convinced is worth it. To ensure new recruits stayed keen, Hackney initially held off asking for any sort of financial contribution.

“To help set the side up the club decided to waive any match subs or membership fees for the first season – a risky, but worthwhile step. This meant we had to work really hard to cover as much of the cost as we could. The club did make a loss that season as a result, but in the long-term we think our financial future is in better shape with women at the club.”

Seeking innovative ways to fund the new side has meant players and coaches alike have looked for original ways to make money, as well as contributing in their own ways.

“We funded the playing kit by auctioning off old club kits to the men’s side. The players took it in turns to cook the post-match meals. And we’re starting to make the most of the additional funding opportunities open to clubs providing women’s rugby – something we should have been better at from the beginning.”

Whitlock concedes that running a women’s team does bring its own challenges, such as the difficulty in finding female coaches to provide the players with a woman role model.

At the earliest stages of a ladies’ team development, it can also be hard to find reliable opposition teams. Developing sides often struggle to bring a full team on match days, resulting in tremendous disappointment when weekend matches are cancelled.

“There’s also the additional strain it places on the club’s facilities. We’ve worked hard to play as many women’s games on Saturday as possible (because why shouldn’t the women be able to enjoy the same post-game Saturday night out as the men?) but of course that can make timing kick offs, designating changing rooms and maintaining the playing surface a real juggling act”.

Despite the challenges, Whitlock says the experience of coaching has been a hugely rewarding experience.

“I’ve found being a coach more rewarding than playing ever was. Utterly. Watching them develop as players is great, but really I’ve been far more proud of how they’ve come together. Watching a collection of strangers grow into a group of friends and then into a real team has been unbelievably rewarding. Proud doesn’t come close.”

It’s also meant that Hackney RFC has evolved as a club, with women getting involved at all levels to ensure the ongoing development of the entire organisation.

“We’ve encouraged the women to get involved on the committee, not only taking responsibility for their team, but also helping run the club. Hackney RFC now has a woman as Secretary, the first time ever, as well as three of four other women committee members. Their energy has been infectious.”

It’s been a highly successful season for the Gladies, which saw them finish third in their inaugural season in an official league, and according to captain Charley Miller, there are significant plans for the team’s ongoing development.

“We want to see the side continue to grow and make strong links with the Hackney Belles, a youth team, and local schools. We’re also hoping for promotion next year!”

Her coach is also hoping to take things one step further in the future and produce a development team alongside the first squad: “It would be amazing to develop a second side in the near future, to let beginners feel their way into the game and to offer playing opportunities for more women in the community.”

Hackney is just one of several women’s teams making storming strides in their first seasons. They are testament to the importance a ladies side can have within a male-dominated club, and the diversity and balance they bring. For those clubs still pondering whether to branch out their teams to the fairer sex – what are you waiting for?