A rugby match is a lot like a battle. You size up the enemy, don your body armour and go forth onto the field of combat. You put your body on the line for your comrades and either enjoy victory or suffer defeat. 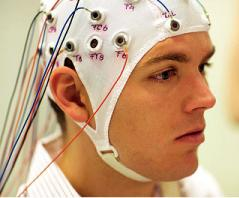 In the course of researching a programme on Future Wars for BBC World Service’s The Forum, I came across a fascinating article by Sally Adee about cranial stimulation, a new technology being tested by the US military. When she is fitted with a “thinking cap” which runs 9 volts of electricity through her brain, her ability to shoot is vastly improved. Sally explains:

“The 20 minutes I spent hitting targets while electricity coursed through my brain were far from transcendent. I only remember feeling like I’d just had an excellent cup of coffee, but without the caffeine jitters. I felt clear-headed and like myself, just sharper. Calmer. Without fear and without doubt. From there on, I just spent the time waiting for a problem to appear so that I could solve it.”

Although this technology is not battle-ready, and any attempt to introduce it would provoke much debate, it is still fascinating to think about what we could achieve physically if we were able to tune out all our doubts and fears. And what affect would an electric scrum-cap, if you will, have on our performance on that other battle field: the rugby pitch?

Imagine a special scrum-cap that removed your doubts and fears, allowing you to focus on the job in hand. How many of us have spent minutes following a missed tackle or a dropped ball mentally beating ourselves up instead of focussing on beating up the opposition? Leading to another mistake and another volley of negative voices in our heads.

What would it be like if we could switch all that background noise off and devote ourselves entirely to the next tackle, the next pass, the next try?

Apart from thinking of our own game, we might have a bit more mental space to look up and read the situation in front of us. And with doubt and fear removed, the confidence to step up and make a positive impact on the game.

I once broke my collar-bone when I gave into the fear and doubt at a crucial moment. My team was training for a big match and doing what seemed like an endless tackling drill. Having been tackled repeatedly, I was tired and sore, but reluctant to complain as I was fighting for a place on the team. Going into the next tackle, I lowered my shoulder, ready to hit hard. Then I looked up. The player coming towards me was a prop affectionately known as ‘the Tank’. I froze. This is really going to hurt, I thought. And it did. My collar-bone was fractured and my season was over. But if I hadn’t frozen with fear immediately before the impact, it’s unlikely I would have broken anything.

Ultimately, what’s going on in our heads makes just as much difference to our performance on the pitch as any amount of physical preparation. The electric scrum cap isn’t available yet, but we can still do our best to replicate its effects when we play. Don’t dwell on your last error. Channel that anger with yourself into your next tackle, your next pass. As in all aspects of life, we can’t change the past but we can change the future. In this case, imagining a futuristic brain-fryer can help us to reconsider our mental game.