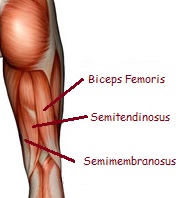 Back in the 1700s, butchers in England would hang pig carcasses in their shop windows by the long tendons at the back of their ‘knees’, which developed into the name for the human body part called “hamstrings”.

However, the three muscles running the full length at the back of the thigh are individual and have names of their own; the two-headed biceps femoris, along with the semitendinosus and semimembranosus. Although not as massive as the quadriceps femoris group, the hamstrings are strong hip extensors and knee flexors.

As a group, the hamstrings flex the knee, extend the hip and tilt the pelvis posteriorly. The biceps femoris also rotates the flexed knee and hip laterally whilst the semitendinosus and semimembranosus rotate these joints medially.

What Is a Hamstring Strain?

A Hamstring Strain is the most common rugby related injury due to the amount of running, jumping, stopping, starting and more importantly accelerating involved in the game and although the term is used quite a lot, hamstring strains are quite often misunderstood as the term ‘Hamstring Strain’ is pretty non-specific.

The injury usually occurs when one or more of the above muscles attempt to contract against another applied force which can overstretch the muscle, leading to tears. his happens during hip hyperflexion and/or knee hyperextension.

There may be slight pain through movement, cramp and/or tightness with possible light inflammation that may not come on until after activity.

More severe pain is felt immediately, particularly through movement but the area may also be tender to touch and inflammation is more noticeable. Walking is possible, but with a limp. Bruising appears after a few days.

Complete tearing of the muscle causing immediate burning/stabbing pain. There may also be a large lump visible and difficulty with standing or walking. Bruising appears after a few days. 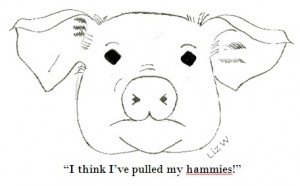 The immediate treatment of any muscle injury consists of the RICE protocol: Rest, Ice, Compression and Elevation. Ice should be applied [not directly to the skin] for 20 minutes; repeated every two hours and continued for at least the first 48 hours post injury.

Minor to moderate hamstring strains generally recover without any other treatment and depending on the grade of injury, return to sport can take anything from two weeks to three months, possibly more. Severe cases may need surgery and you should consult your GP if you are in any doubt.

Sports massage is extremely important to speed up return to play. Qualified practitioners are able to assess the individual muscles for any deficit, tension or adhesion that may lead to an injury but also are able to align the muscle fibres to minimise scar tissue.

A functional warm up before both matches and training will decrease muscle strain injuries as muscles are more extensible with increased tissue temperature.

Ensuring a good balance between the posterior muscles and the anterior quadriceps will also reduce incidents and particular care and attention must be taken with young people experiencing growth spurts.

For longevity and an uninterrupted season, I strongly recommend a monthly sports massage; eliminating factors is far more productive and painless than recovery.