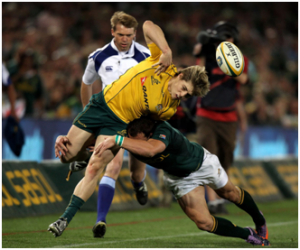 This week I will be looking at the touch-line rules for when a player carrying a rugby ball goes into touch (out-of-bounds).

Although this may appear to be a small aspect of the game of rugby, time and time again we see that players that understand these rules will greatly benefit in tough situations when they are under pressure by the opposition by choosing the right options and reacting quickly to game situations.

The photo on the left shows Australia’s James O’Connor being forced out of touch by South Africa’s Francois Hougaard. Not only was this a very good tackle, but it also prevented O’Connor from scoring a very likely try.

When is a player in touch?

The IRB Laws of Rugby Union 2012 state that the rugby ball is considered in touch when it contacts or crosses the line of touch, or when a player with the ball crosses or touches the touch-line. 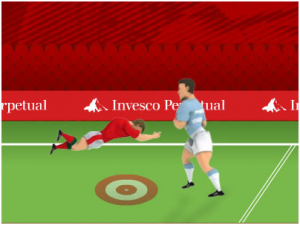 A simple explanation of the rule is as follows: If the player in the blue is tackled by the player in the red past the white line, then he is out of play and a line-out will be given to the red team. Not only does this mean that the team in red have successfully denied a try to the opposition, but they have also gained possession of the ball.

For a player to be deemed to have gone into touch, it is not necessary for his whole body to go beyond the white line. So, if any part of the player’s body goes out-of-bounds and touches the ground (e.g. foot, arm or head), the opposition will get the line out. Sometimes this can be tricky for the touch judges and referee to determine – even with the help of the video replay.

When a rugby player leaps to catch the ball, his feet must both land in the playing field to keep the ball out of touch.

If the ball goes into touch it is thrown back into play. This may be taken quickly from one player to a member of his own team. However, usually this is done through the ‘line-out’ where both teams line up in equal numbers, one metre apart and contest a ball thrown between them.

A line out/throw-in, returns the ball back into play after it has gone in touch. It is initiated by a member of the opposite team of the player who knocked or carried the ball into touch. When the culprit is unclear, whichever team is on the attack takes the line out.

Whoever is doing the throw-in stands where the ball went into touch, and he must stay in touch when throwing the ball. He is required to throw the ball straight in, and the ball must go at least 5 meters perpendicular to the line of touch before it hits the ground or contacts another player.

It is often that we see quick players like wings try to capitalise on their speed by going on the outside and aiming for the corner try. However this always leaves the players at risk of going out of touch because of the narrow space on the outside.

The video below shows Australia’s George Gregan’s amazing cover tackle that denied New Zealand’s Jeff Wilson a try and caused Wilson to knock the ball on. If you take a look at where Wilson’s feet end up, it is a close call as to when Wilson’s feet go into touch.

In this video England’s Manu Tuilagi does well to keep his feet in touch for a well needed corner try against Australia:

While at times players may have to go for the corner to try and score a try, this may lead to a higher risk of being forced out of play and in to touch. Players with a good knowledge of these rules can use them to their advantage to keep the ball in play as demonstrated above.