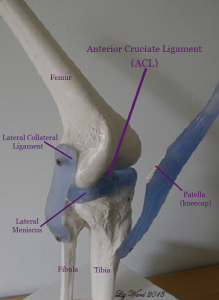 Everywhere I go these days I appear to come up against an ACL injury. This involves the Anterior Cruciate Ligament; one of the short ligaments that cross (hence ‘cruciate’) inside the knee inhibiting forward movement of the tibia (shin bone). It is also one of the four main knee stabilising ligaments. The others being the:

The ACL is attached to the top of the tibia at the front of the knee and runs towards the back of the knee, to the bottom of the femur (thigh bone). A tear to the ACL will allow the tibia to move forward too much, causing instability.

ACL injuries are acute traumatic injuries which tend to occur in sports involving quick acceleration and deceleration whilst changing direction and sudden stops. Rugby certainly falls within this category and it is interesting to know that female athletes are more than four times likely than their male counterparts to tear this ligament and approximately 70% of these injuries involve no contact whatsoever.

By a lesser degree, the ACL can tear as a result of a direct blow, commonly to the outside of the knee. In this instance, there may also be damage to the MCL and the medial meniscus. When this happens, it is known as an ‘unhappy triad’ or more commonly these days as the O’Donoghue’s triad, after the guy who coined the phrase in 1950.

When the ACL tears the athlete will often hear or feel a pop deep in their knee. They will feel unstable and it will soon become too painful to bear weight. They may also see quite a bit of inflammation around the knee caused by bleeding inside the joint.

A thorough and accurate diagnosis may need to wait a few days until the swelling subsides sufficiently. Immediate treatment should concentrate on reducing pain and inflammation. 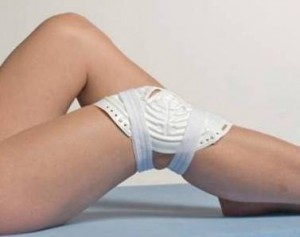 Once inflammation has subsided an MRI scan may be used to confirm the result of stress tests although an arthroscopy may be called for if the scan is not clear.

Although ACL injuries can be treated conservatively; with good exercises and support, if the patient is an athlete, an ACL reconstruction may be advised to gain sufficient functional stability but return to play should be no longer than six months with the correct rehabilitation.

There are several reasons for an athlete to be more susceptible to ACL injuries including the size of the individual’s ACL. However, the main cause is muscle imbalance, in particular with lack of strength in the hamstring muscles. In this instance, the athlete will compensate with their quadriceps muscles which pull the tibia forward with little antagonistic resistance, as the ACL tries to hold the tibia back.

As you can imagine, this very little ligament does not stand a chance against well-developed quadriceps and something will have to give. Unfortunately, it is usually the ACL that gives!

This is actually the reason why females are more susceptible than males. It does not have anything to do with the Q-Angle or hormones but the lack of strength in the average female hamstrings.

Other than paying attention to hamstring health and strength, proprioceptive exercises are recommended, including exercises on a wobble board. This will help with balance, stability and knee strength.

I tend to stay away from isolation exercises; encouraging and coaching Olympic Lift techniques but a really good strengthening exercise for the hamstring muscles is the Bridge. Including a stability ball also helps with core strengthening and balance:

It is also incredibly helpful to learn how to jump correctly; landing on the balls of the feet with the knees flexed. The ACL ligament is unlikely to tear in this position.

If you have any questions or comments, please post them below and I will do my best to respond to them.