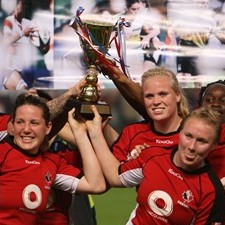 Hello to all you FRN followers and fans of social media!

When I was first approached by FindRugbyNow to write a blog I was quite nervous having to follow in the footsteps of Fiona Pocock. Her blogs are fantastic and a big act to follow!

But here I am, writing my introduction and letting you know what I will be able to offer you in the upcoming months.

To go along with this introduction, I want to provide some advice on how to read my blogs. I write just like I speak, as if I am telling a story with a Canadian accent. So go on, insert a Canadian accent, have a laugh and get to know me a little bit better!

I have had a passion for being active, taking on challenges, and playing sport my whole life. It all started when I was 3 yrs of age, hauling around boulders in the back yard. I think my parents knew at that moment that Barbie dolls weren’t going to be my best friends (ok, let’s be honest…I loved Barbies, but who didn’t?)

Moving forward, I played every sport offered throughout my school years. I was a competitive and committed swimmer outside of school. I swam five days per week after school for three hours per day, and during three of those days I would also swim for two hours in the morning before school.

Swimming was a passion of mine and I swam for eight years and five of those years I was committed to a very demanding schedule.

I also excelled in athletics growing up – first at cross-country, but as I got older and grew into my body my university coaches suggested I move into the speed training group. That was subtle! I wasn’t offended though as it was an obvious and wise move.

But through those years, as fun as it was, and as well as I did, I was never good enough to take that next step. Something was missing.

Finally, after years of watching my dad play on the weekends, rugby was introduced into my school in year 11. I believe my parents said “its your turn to play!” That I did.

I only made it through two weeks of try-outs until I had to pull out due to stress fractures in my lower vertebrate. I would have to be in a back-brace for seven months. I was really bummed out! Not only did that mean I couldn’t start playing rugby, but all the other sports I had been involved in had to be put on hold too. It was a nightmare!

Looking back on it now, considering the stress fractures came from a combination of all the sports I had been involved in and the constant strain it had put on my body, this mandatory period of rest was probably for the best.

Seven months later I was back in the game – excited to finally take my turn and to learn the ins and outs of playing rugby. Thankfully I was athletic, because to this day, I still don’t think that I know all of the rules!

Actually, in the first real tackle I ever made I separated the girl’s shoulder, and I ended up crying! I felt awful! To be fair, I don’t think there was an attempt to wrap…not sure we had went through tackle 101 at that point.

Aside from this first incident, I had a really good experience playing rugby those first few months.

After I graduated, I was chomping at the bit and wanted to keep playing, so I joined a women’s league because my university didn’t have a women’s team.

To be honest, it scared the absolute pants off of me! Everyone was so good! But I got into games one half at a time, slowly learned the pace and by the end of the season I considered myself a vet! Well, maybe not a vet, but I was definitely getting the hang of things.

I then played a summer of provincials and, to my surprise, got invited to a U19 Canada camp. I found out later that I was selected because I could kick – it must have been all of the soccer (football)! 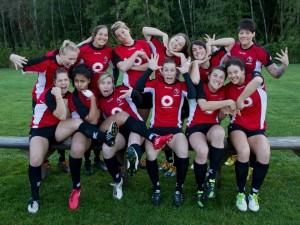 Being silly with the team pre-Dubai 2011

Thankfully my skills caught up to my athletic ability and I was invited to a U23 Canada camp that following summer. From there my passion for the sport grew. I found myself wanting more, and nothing seemed to be good enough.

After that summer of playing U23 it was time for me to make some decisions – ones that would make or break my future in rugby. I ran some ideas by my extremely supportive parents, and before they or I knew it, I had packed my bags and I was on my way to the West coast!

That’s how it all started for me. From there I was invited on tour with the Senior National team, and six months later I was playing in the 2006 World Cup in Edmonton, Canada.

In 2011 I was also very honoured to have the opportunity to Captain one of Canada’s most successful women’s teams to date.

Recently, I have been doing a lot of travelling back and forth between London and Canada playing for the Saracens and for the Canadian National team, to pursue my rugby goals and dreams. Currently we are training to prepare for the 2013 World Cup in Russia. And not to get ahead of myself, but I have my sights set on 2012 15s World Cup in France and the 2016 Olympics in Rio. 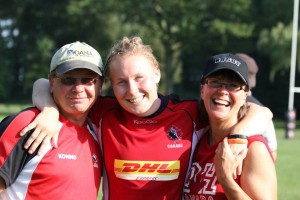 Mandy with her supportive parents at Nations Cup in 2011

What a lot of people would call sacrifices, I consider life choices. Everything I have done has been to aid in my pursuit of excellence. I have been surrounded by some of the most amazing people in the world – that wouldn’t let me settle for anything less than greatness. Not only have I put in the hard work, sweat and tears, but I have had the friends, family and supporters who have backed not only me, but our team through all of the thick and thin.

Thank you for sitting through a little piece of my story. If you made it, well done and thanks for sticking with it.

I wont stop pursuing my goals. I wont be finished until I can honestly say I have done everything in my power to get to where I have worked hard to be. No regrets.

I wake up every morning with the motivation that I have a head start on the rest of the world. When I think for a second that I can’t do it, I think of all the people who got out of bed saying they can. Thinking that I can control me, and will only accept being one step ahead, never behind. What motivates you?

If you would like to get in touch with Mandy, just email info@findrugbynow.com with “Mandy Marchak” in the subject line and let her know how she has inspired you, topics you would like to see her write about, questions about fitness, nutrition, or anything else.

Mandy Marchak is one of Canada's most successful rugby players. She has been involved in many tours with both the Canadian women’s 15s and 7s teams, including the 2009 7s World Cup in Dubai and the 2010 15s World Cup in England. To date, she has 35 caps for the Canadian 15s team and 17 caps for the 7s team. She is also a Saracens player and enjoys playing social 7s with the Moody Cows and Storm 7s in the summer months. View all posts by Mandy Marchak 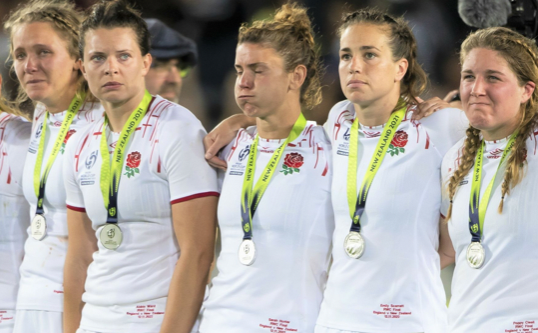 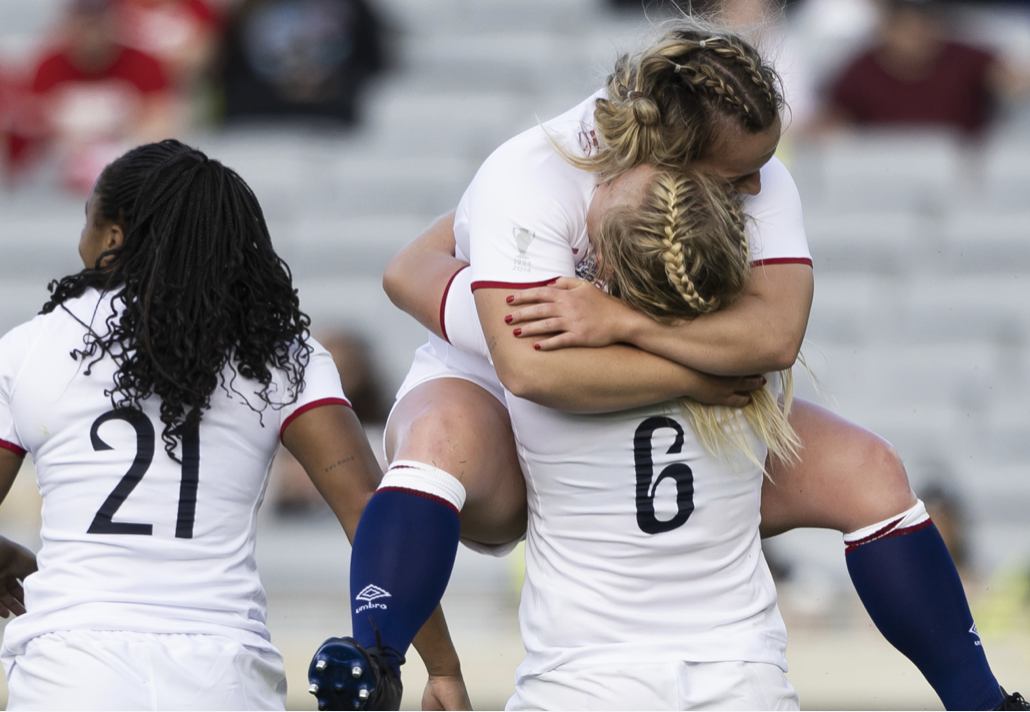