The ACL Injury: Road to Recovery 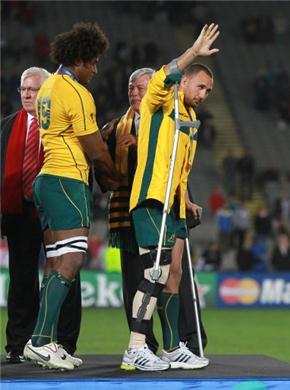 Knee injuries seem to be more and more common in rugby these days; Jamie Roberts and Quade Cooper are just a few high-profile members of the ‘ACL’ club. I am a less well-known member.

I started experiencing knee problems from the age of 14 (I am now 21) when I had started playing rugby seriously at school. Several doctors told me that it was just growing pains.

When I was 16 my rugby coach was showing some physiotherapists around the school gym and by chance I was running on a treadmill. They noticed that something wasn’t quite right with my gait, and it all started from there. A few months and several physiotherapy sessions later I was having knee arthroscopy to flush out the floating debris from my previous knee injuries.

……… Fast forward to University and I am still struggling with my knee injuries, but I have been kept together by my brilliant osteopath and my S&C Coach, Louis Howe. However, after seeing three knee specialists, it was decided that I would need Bilateral ACL reconstruction and I decided to have both knees done at the same time to reduce my recovery time. On the 21st of March I had the operation.

The ACL or anterior cruciate ligament is one of the four major ligaments in the knee-joint and its job is to prevent forward movement of the Tibia from underneath the femur. A tear or a rupture of the ACL can cause swelling and severe pain when bending the knee. It may cause buckling or locking of the knee-joint during movement, and the knee may give way while standing still with weight on the knee.

I wasn’t in that much pain after the operation, which lasted four and half hours! I hear a lot of horror stories about the NHS, but they were great with me. I was up on crutches less than 24 hours after my operation. As I had a hamstring graft I had a horrible pulling sensation every time I moved them too far. The goal of these first two weeks was to reduce swelling and increase my range of movement, but after a week it was clear that it was going take me a lot longer to recover than normal. I was less than 80 degrees flexion in both legs and I was struggling to shift the swelling despite constantly icing my knees.

The swelling seemed to have gone down a bit. I got a bit of a beasting from the physio this week as he felt I wasn’t progressing well enough. I was also struggling with my revision at this point due to the pain medication, which kept me from staying focussed and alert. Not a great week. I am glad that I can finally have my staples out and my mum is waiting on me hand and foot!

I did a lot better this week; I was more mobile and feeling a lot better about my rehab. I was up to 100 degrees extension in one leg and 80 degrees in the other leg – still not great but getting there! I finally got back into the gym, which was such a good feeling. I even managed to venture out to the cinema. The physio let me do squats, walk without crutches and do single leg balances. I was definitely feeling a lot more positive this week.

I have gone off the boil with my rehab this week as I have to start revising for my University exams! I am starting to get a bit fed up with all this rehab, I just want to get up and starting playing again. I am walking more and more which is good, but I still have a bit of a limp which I need to get rid of. Sleeping seems to be such a pain at the moment; it’s so hard to get comfy at night. I like sleeping on my front, but due to my knees, I have to sleep on my side or my back. It’s the small practicalities such as sleeping or going to the bathroom you normally never think about that seem to give you the most grief when you’re injured. I saw the physio again this week and I have improved my range of movement a lot, 115 degrees in the left leg and 95 degrees in the right.

My rehab has been slow thus far but I should be walking by next week. If things go to plan then I shall be doing one-legged squats in three weeks time (fingers crossed!).

To all of those other ruggers out there with rugby injuries, stay strong and keep at it. Rehab is a long process, but stay focussed and hopefully we will both be up and running soon.

By: Mayowa Olonilua, a 2nd year psychology student and rugby player, who started playing rugby at a little school called “Howsham Hall” in North Yorkshire (which is now called “Tool Academy”) and has played for several Club sides, including: Newark, Athletico De Rosario (Argentina), Chicago Griffins (USA), Blackheath and, prior to injury, Staines.