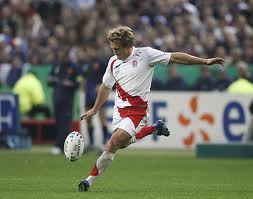 This month I am going to take a look at kicking in rugby, which is a very important rugby skill that can have a huge impact on a match. A team which has no kickers not only miss out on the opportunity to gain valuable points, but are at a disadvantage throughout the whole of a match. Again, this is a basic introduction and over the next few blogs the rules will get more complex.

Many teams have players who can kick the ball but every team has one or two players who are more consistent kickers and hence they become regarded as some of the most valuable players of the squad.

One of the things that makes good kickers is the ability to kick accurately under tremendous pressure. The RFU has published a good document on how to increase your kicking effectiveness under pressure. Check it out here.

For a kick-off the main rule is that the ball must go forward at least 10 metres. The kicker has three options when kicking:

Please see below for more information about drop kicking.

Penalties will happen in every game of rugby and if a team have a kicker who converts the majority of these, it takes the pressure off the rest of the team to score tries due to the fact that it is possible for a team to win a game through penalties only. Penalty kicks are generally awarded for offside and foul play.

This is an example of a penalty by Dan Carter, a player well-known for his good kicking ability:

Like penalties, conversions are a very important aspect of the rugby game and a good goal kicker can make a big difference in a match. Place kicking is one of the hardest skills to perfect, but with constant practice and dedication it can turn into a player’s most valuable skills.

A consistent goal kicker is able to contribute to points, demotivate the opposition, make the opposition more careful at the ruck (giving the other team the advantage) and provide energy to his team when rewarding the team’s efforts with points.

Practicing this skill is vital and we have found this site to have some very good place kicking tips.

Drop goals are always seen as a dramatic end to a match, and in most cases they are. A converted or missed drop goal impacts heavily on the match.

Below is an example of a crucial drop goal which was converted by Ronan O’Gara to give Ireland the win in the Grand Slam and the Triple Crown. O’Gara is considered by some as one of the best kickers in the 21st century to date.

Drop goals can also be converted if a team feels that they may not get a try and have no chance of moving nearer to the try line.

You can find good tips for practicing drop kicks here.

This is the trickiest type of kicking because if a kicker gets it wrong they can give away not only possession but also the advantage the rest of the team has worked so hard to gain. Possession kicking includes kicking the ball forward to put opposition under pressure and hoping they drop the ball near their try line or kicking to a teammate which results in the opposing team not being able to tackle the teammate before the try.

Click here for a good article to master different kinds of rugby kicks.

Every rugby player, be it forward or back, can benefit from having a good kicking ability, so don’t think that kicking skill is reserved for the flyhalf and fullback only. The better a team can kick and the more players they have with this ability, the more effective they can be in gaining a tactical advantage over their opponents.

So, what are you waiting for? Get out there and practice!