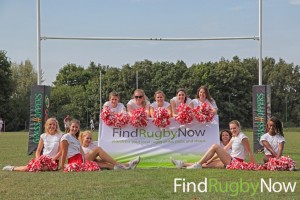 Last Sunday on 19 August Find Rugby Now held its first ever Sevens Tournament at Grasshoppers RFC in London on what was undeniably one of the hottest days of 2012.

The tournament was held in partnership with the Eat Festival and featured some fun additions to the usual sevens tournaments, which included cheerleaders, a caricaturist and some awesome prizes courtesy of our partners – FrontUp Rugby, OPRO and Lusum Rugby.

These festivities were complemented by some great food and drink stalls and some live music entertainment throughout the day, including performances by Anthony Strong and Rachel D’Arcy. 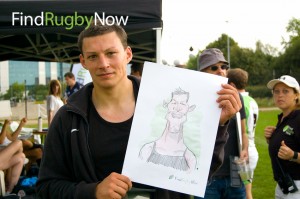 These VIPs helped to make the day more special by passing out the trophies and chocolate medals to the winning teams at the award ceremony and meeting players and fans throughout the day.

The tournament featured both a men’s and women’s competition with the standard being very high on both sides and with a social pool to complement the women’s elite matches, which featured high caliber teams like Moody Cows, Storm 7 and the Pink Ba-Bas.

The men’s pools saw a lot of very good sides, including Thundercats, Old Emanuel’s, Wrong Direction, S&L Ravens, Old Columbans and FindRugbyNow’s own sevens team, but in the end the Stickmit Psycho’s came out on top in the cup and the Thundercats won the plate.

In the women’s tournament, Storm 7 won the cup in what was a very closely contested final against the Pink Ba-Bas and Andrea’s Angels came out on top in the plate thanks to some guest appearances by some Waspies and other seasoned players.

Special mention should go to Millwall Venus and Harlequins who put in some great matches with a lot of new players that had never played sevens before. 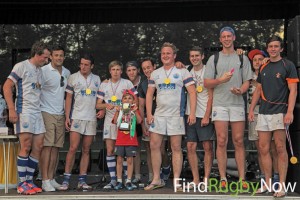 The Harlequins went on to win the “Team of the Tournament” for their positive attitude and sportsmanship on the day, and Wrong Direction, Moody Cows and Millwall Venus went on to win some awesome Lusum prizes for some top-notch performances.

One of the highlights of the tournament was the School of Hard Knocks team, which many of you may know from the famous Sky television show, which featured both old and new SOHK players – some only having played for a few weeks before the tournament. 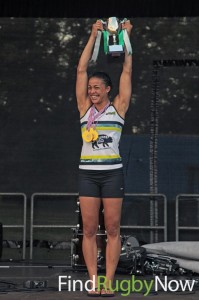 All of the players put out a great performance and we were thrilled to have them participate on the day for what was the first ever sevens tournament for the SOHK. Their performances were recognised with the “Best Newcomer” award, which came with some well received drink prizes.

Lithuanian Rugby also deserves a mention due to their ever enthusiastic supporters and their passion for rugby for which we could not help but present them with the “Best Spirit” award on the day.

Many thanks to everyone who helped make this year’s inaugural FRN Sevens a success. Special thanks goes to our media team – Daniel Svilenov, Abhi Dev, James Mesher and Lee Crabb (Scrumpix); our awesome FRN staff – Stuart Mason, Ashley Massey, Katie Mills and Jo and our VIPs – Fee, Pale, Chris and Mark for making it down and helping us present the awards.

Also special thanks to Supreme Engraving for their beautiful trophies, Viper10 for the best rugby kit around and UK Sports Club for their excellent organising!

We hope that everyone had a great time and we look forward to seeing all of you back again next year!

If you like any of the photos below and would like to order them in hard copy or soft copy, please use the Contact Us form below and provide us with: