As many of you will know, in rugby union a full rugby squad is composed of 22 players of which 7 players serve as substitutes throughout the course of the match. 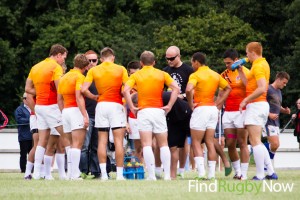 A good use of substitutions can make a big impact on a game.

A normal bench will consist of four forwards and three backs, but this is not necessary and it is down more to a manager’s discretion who they include on a bench.

Out of the seven substitutes selected, a manager can choose to play all seven players, play a select few or play none at all. However, once a player is substituted they cannot be brought back onto the pitch except for one of two reasons: (1) blood injury which requires urgent medical attention (a “blood substitution”) or (2) a forward is required to come back onto the pitch to replace an injured front-row forward.

A serious blood substitution can result in the player being off the pitch for up to a maximum of 15 minutes (actual time, not game clock), after which it becomes a permanent substitution. However, smaller cuts may be taken care of within a few minutes with a bandage or Vaseline to stop the flow of blood.

On 12 April 2009 there was a blood substitution incident that took to the headlines as a scandal when Harlequins used a blood injury as a tactical way to get players back on the field of play in the Heineken Cup quarter-final match against Leinster.

The scandal was infamously titled “Bloodgate” and revealed just how far some teams are willing to go to win matches and how even substitution rules may be in jeopardy of being abused.

The incident involved Harlequin’s Tom Williams biting into a blood pack, causing him to be taken off the pitch and specialised kicker Nick Evans taking his place. With the score at 6-5 to Leinster and five minutes to go, to try and cover up the incident Williams then had his mouth cut open by the Harlequins club doctor Wendy Chapman.

Although Leinster still won the match, when the incident came to public attention it caused a huge scandal, and all those who participated in the incident were punished – with Williams himself receiving a 12-month ban (later reduced to four months).

Decide for yourself – watch the video here.

There have been proponents of introducing rolling replacements to rugby union, which have been an accepted part of rugby league since they were first introduced in the early 1990s.

Proponents argue that rolling substitutions would benefit player welfare, as they would allow potential cases of concussion to be properly diagnosed.

Although rolling substitutions have been considered for rugby union, this change has yet to be implemented and many claim that it will change the character of the game by giving it an even bigger focus on size and bulk.

“A prop who wanted to last 60 minutes could not balloon up to 24 stone if only because he would become an absolute liability in open play,” wrote Wasps and Wales coach Shaun Edwards, who is a legend of British rugby league, in his column for The Guardian.

“However, if one of the front five has to last only 10 or 20 minutes of explosive action before getting a rest on the bench, then 20 stone is better than 18 and 22 better than 20, and enough time in the gym will certainly shape these new giants.

In conclusion, substitutes are an important part of the game which can be used to give your team an advantage, but remember to stick to the rules or be at risk of being exposed at great cost.

For more information about substitutions, check out this BBC website page: http://news.bbc.co.uk/sport1/hi/rugby_union/rules_and_equipment/4205916.stm