Our club of the month is Scotty’s Tigers Rugby Football Club (RFC), an invitational rugby team which is dedicated to raising money for Scotty’s Little Soldiers, a charity which supports the children of our fallen servicemen and women.

On 1st June 2013 Scotty’s Rugby broke the world record for the longest game of rugby union which featured an exciting contest between Scotty’s Little Soldiers and the HM Forces. The match was played for 24 hours and 51 minutes at Welford Road, home of Leicester Tigers who are avid supporters of the charity (including Ben Kay, Lewis Deacon and George Chuter).

With the success of the previous year, this year Scotty’s Tigers aim to field 7s and 15s squads and position their men’s and women’s teams to compete on the UK 7s circuit in 2014.

This will provide an excellent opportunity to spread the word of Scotty’s Little Soldiers and to raise money for this worthwhile organisation throughout the UK through the avenue of sport. 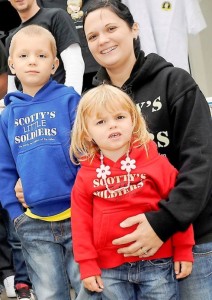 The charity sends children letters, cards, gifts, tickets for events and even fees for local sports or activities.

The long-term aim of the charity had always been to be able to purchase holiday homes for the families to use.

In the summer of 2012, the charity purchased the first “Scotty Lodge” in Great Yarmouth. A second lodge in Blackpool followed in March 2013.

The charity has gone from strength to strength over the past 3 years and have raised a staggering £1,000,000.

In addition to the aforementioned UK-based holiday homes, the charity is now in great position to give widows and their children the chance to get away from the stress and pain of daily life, letting the kids be kids and smile.

There is still, however, so much more that Scotty’s Little Soldiers wish to do to help these families and it would be fantastic if you can help support the charity through Scotty’s Tigers RFC.

In exchange, Scotty’s Little Soldiers will be able to provide you with great publicity through a variety of media nationally.

The charity has a selection of kit sponsorship packages and should you wish to discuss this further or gain more information on publicity please do not hesitate to contact them.

If you are not be able to contribute financially to the charity, but are able to provide items for raffle or auction to raise funds, these items would be very much appreciated.