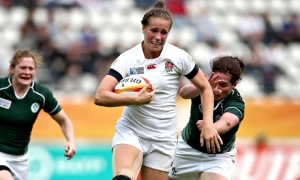 England’s women secured their place in the World Cup Final following an impressive 40-7 victory over the hotly-tipped Ireland team in Paris.

The victory sees England now set to face Canada in the final, coming just weeks after the two sides drew against each other in the group stages of the tournament.

Following their famous victory over favourites and defending champions New Zealand in their group, Ireland had gone into the semi-final against England with many expecting them to progress to the final.

Aside from Alison Miller’s early try, Ireland were never in the game. England set about racking up the points during a dominant 80 minutes, scoring five tries on their way to a comprehensive victory, with Emily Scarrlett rounding off a sensational performance with 11 kicked points.

After watching his side destroy one of the tournament’s most fancied teams, England women’s head coach Gary Street was quick to pour praise on his squad for their performance.

“We knew that this was going to be a huge game. There has been a lot of build-up and there was a fair amount of pressure on us, but we really did deliver and I am massively proud of them all.”

“One of our strengths is the amount of experience we have in the squad. To be able to bring players off the bench with 60 caps is a huge bonus, and picking the squad for the final will certainly be a challenge.”

Canada had a far less easy route to the final, however, narrowly scraping past the hosts France in a thrilling 18-16 win to book their place in the final for the first time in their history.

The North Americans will now have to overcome the odds with the likes of Paddy Power if they are going to be able to spring another surprise and condemn England to a fourth straight runners-up finish at a World Cup.

Photo: Courtesy of The Guardian