With the warm weather just around the corner, the sporting season is set to kick off once again, so where better to get our exercise inspiration than some of the best athletes out there?

Here are a few tried and tested match recovery methods for those who are looking to get fit through sport in 2015. 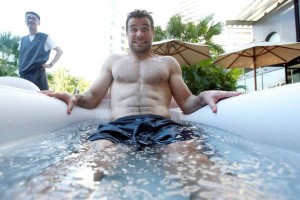 We’ll get the torturous one out of the way first – it has been stated by many rugby stars and physiotherapists alike that ice baths offer a multitude of health benefits. Craig Smith, a physiotherapist at Lancashire CCC, stresses the benefits of ice baths, which can help to “cleanse” the blood. So how does the process work?

After a strenuous game on the pitch, it’s inevitable that lactic acid will build up in your legs. Diving feet first into an ice bath will help to constrict the blood vessels, which will draw blood away from the aching muscles. Once you re-adjust to warm temperatures, a new wave of ‘fresh’ blood will course its way back into your veins, providing your muscles with the vital oxygen they need for repair.

This is a method which has been tried and tested by none other than rugby legend Jonny Wilkinson, who swears by the practice – and who better to take advice from than the man who won England the World Cup?

Of course, this one was easy enough to try and test – make sure you get eight hours of shut-eye per night to ensure stronger muscles and better endurance – perfect for rugby players.

After an enduring game of rugby, it’s inevitable that the last thing you’ll feel like doing is more exercise, but tried and tested studies have actually proven that a little exercise after a big session will not only not hinder your muscle repair, but do wonders for you psychologically.

A study of Japanese collegiate rugby football teams put post-exercise exercise to the test. Fifteen members played rugby for 80 minutes, and seven did not exercise at all following the game, while eight performed low-intensity exercises. The subjects were studied after their match through a series of tests, which examined their blood biochemistry.

Scientists discovered that those who had taken part in gentle exercise were significantly less stressed – so if you’ve got a series of important matches coming up, it might be advised to have a light walk, jog or swim to keep both your body and mind happy.