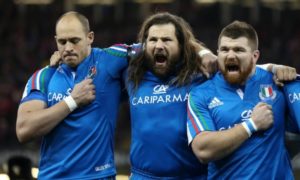 Back in the early 2000’s I was fortunate to visit Italy to conduct coach education and practical coaching sessions. The enthusiasm and passion to learn was very evident, however, basic playing techniques were poor thus making it hard to develop continuous play.

The National side rarely wins a game in the 6 nations. To their credit they did scare the All Blacks in the San Siro district of Milan, but as is often the case, the All Blacks won a dubious scrum close to their own line to relieve the pressure and win the game. Italy still finds it hard to win consecutive games.

Last month I returned to Italy on a coaching mission visiting over 8 clubs as well as the National Academy for U18s and 19s.

The standard has improved out of sight across all ages from U10s to U20s.

There is improvement throughout the leagues and Benneton Treviso and Zebre have fared well in European competition.

This is not by accident. Coaching standards have focused on correct technique. As a result, patterned play and empowerment have improved confidence. Italian passion has embraced the improvement in basic technique and understanding; there is a huge desire to win! Coaches are responding accordingly. Sessions are more challenging, and players are responding.

At Magliano I watched a very good off-loading game played by some U12s. One touch, instant off-load! Lots of player movement, calling and support. Lots of coach enthusiasm also!

At Valpolicella I coached a squad of U16s who reacted to the pace the session demanded, and basic technique didn’t falter. I kept building the continuity and the players “loved it”.

At Colorno I watched a very competent U18 team play with control and understanding. I recommended the number 13 to the National Academy coaches. He ran straight lines and ran away from defenders.

At Capitalina in Rome, I helped coach an outstanding South African touring U 16 squad. I don’t think I’ve seen as good a squad of 15s and 16s in 30 years. They beat a combined Lazio team by a single score!

At Firenze rugby club in Florence, the same U16 side had to work hard to beat a combined Tuscany team. This was a very competitive game of high quality.

I didn’t see the South Africans final game against a combined team from the Treviso/Venice region, but they lost 21-19. Another indication of the emerging talent in Italy.

At Calvisano the Italian National Academy team of U18s/19s played a touring South African U18s and won by 94-5. This Italian squad is equal to any I saw during my time at Leicester.

The coaching and work programs at the Academy are first class and it was an honour to be involved. Former Italian hooker Andrea Moretti heads the program, he’s smart and connects passionately with the players. He will go on to coach at the highest level for sure.

Throughout my visit I was very impressed with the facilities at all the clubs. There is a buzz of activity and the post session food is of restaurant standard.

The private Academy and sports facility at Verona will host the U20 World cup in 2020. The gymnasium is state of the art, quite amazing. Pitches are perfect, and restaurant/accommodation is also available.

The progress currently being made will eventually result in more wins for the National side. Treviso and Zebra have proved this.

So, Italy is now a touring and playing challenge. Culturally it is a must tour venue!

I did the Verona-Florence-Rome, route and returned to visit the Ferrari headquarters in Maranello and do some rafting on the river Arno in Florence, going under the famous Ponte Vecchio.

If you are a passionate coach or just want to provide an exciting tour challenge for your players, then Italy is for you.