Rugby coaching: a year without equipment? 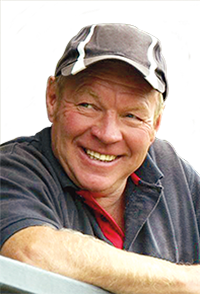 Would the game of rugby union be played differently if all the coaches in the world took coaching sessions without the use of support equipment for one year?

No tackle shields, scrum machines, running harnesses, etc. Is the equipment dog wagging the performance tail? If coaches went out on the field with just some rugby balls and the players, would the game be played differently as a result? Would we produce a better product to coach, play and watch?

Just as squads of players have grown in number, so has the number of support staff.

There is almost an inexorable march towards an NFL-type organisation with coaches for the various aspects of play; defence, attack, scrum, lineout and kicking coach. A whole army of conditioners, analysts and medical staff, which now includes psychiatrists/psychologists and lifestyle gurus. In the NPC in 2016, two referees will be trialled on the field – potentially another step towards more stoppages?

Could we reduce the number of support staff if we adopted a more, ‘themes of work’, approach to our coaching sessions? Coaching topics such as: creating turn-over ball and using it; kick chase and counter attack; chase the ball support play, and more.

The relevance of this speaks for itself. This is a coaching approach closer to the game and team play in particular, and it allows a coach the time to develop the session in the direction of effective team play.

The game itself is a stop start affair, littered with periods of high intensity. Continuity that can last for around one minute but more often less, and in total a game of around 80 minutes, once a week!

In a recent four-game International tour by England to New Zealand, three tests and one midweek game had an entourage of over 75 personnel which included players and support staff. All flying business class – the cost astronomical.

New Zealand play the best rugby, closely followed by Australia. By best I mean a support-based game with fluency and continuity – all 15 players contributing. There is little evidence of large numbers of support staff and they play the game in a way that suggests a relevant transfer from the training field.

A player’s focus should be on team play when he takes to the training field – about how well the team can play and how he can contribute. Understanding his positional role as well as the general aspects of the game – for example, support play – will ensure he can contribute to a more exciting game.

If players move from one coach to another, one collection of required equipment to the next, every training session, this will minimise concentration and understanding of team play. Even now there is a predictability in the way the game is played, especially by teams, in the northern hemisphere. 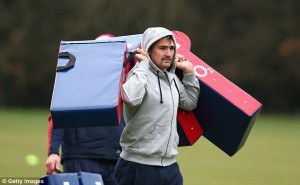 All teams in the Aviva premiership box kick down the line from around their own 22 metre line, and have a look at how often a player with the ball runs deliberately into an opponent, without any thought of evasive footwork. This a direct result of running into a player with a tackle shield at training. Would he do this at training if no shields were held by defenders? Of course not, he would use footwork; it is less painful.

Kick tennis is returning. In a recent game between London Irish and Northampton Saints there were six kicks inside the first 46 seconds with the sixth going out on the full! The kicking coach and the analyst were rubbing their hands with glee as they had something to do on the following Monday, to occupy their time.

Maybe that is the crux of the problem? The players and support staff are full-time professionals and therefore we have to find work for them to do during the week.

If we said all training sessions were about team play and we dealt with aspects of team play within the session, i.e. themes of work, we could utilise the time more effectively and the session would be closer to the outcome we want to achieve; a fluent support-based game with action and involvement for all. A greater chance of the game being played well on Saturday as it would be an extension of the training field.

I’m saying to the clip-board head coach: “leave it in your office.” By all means plan, but coach by feeling and passion… need a shower afterwards! Coach more, not less, with the players.

In conclusion if we want to focus more on team play we should be working towards the following:

Exciting team play can well be summed up as…

“Using the ball is a blend of understanding with attitude; of team awareness with individual virtuosity; of practised patterns with spontaneous reaction. The blending is elusive and short-lived”.

A year free of coaching aids may well go some way towards achieving this model and redefine the relationship between player and coach.