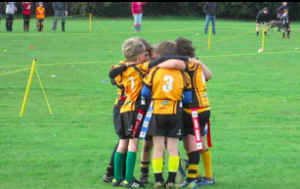 Once again an article in one of the UK newspapers is suggesting that rugby should be banned in schools.

These types of articles seem to be wheeled out on a semi-regular basis backed by a report of Professor Pollock, which focuses on rugby as the most significant risk to young people attending school.

It is important to understand that Professor Pocock’s own son was injured playing rugby, but this crusade is getting out of hand.

Without getting into too many of the details, below are three main reasons why rugby has great value for school age children and why the call to ban the sport in schools is unjustified:

1. Similar risks exist in many other sports but neither the Professor nor the editors of these newspapers seem to acknowledge this.

2. The media often fails to mention the five core values, which are at the heart of the sport – Teamwork, Respect, Enjoyment, Discipline and Sportsmanship.

3. The fact that rugby is (and hopefully will always be) a game for all shapes and sizes makes it one of the most inclusive sports in existence, which promotes self-confidence, team work, respect of others and self-worth.

As a parent I can understand Professor Pollock’s desire to protect her children and others like them, but this one-sided approach by the media is bordering on unprofessional and approaches scare-mongering tactics.

And whilst this is being “preached” to the masses in the newspapers there is very little “opposing” comment coming from those representing the game itself.

Those of us involved in club rugby and rugby coaching in schools are aware of the very small number of injuries which do happen.

And those involved do their very best through good coaching and best practices to continue to mitigate such injuries as exemplified by the continued developing focus on concussions and pitch-side physio assistance over the past few years.

We want to encourage those not involved in the game to come down to clubs, to take up a brilliant sport and to reap the benefits of it. However, some of these prospective players/referees/coaches are getting the “preaching” about the dangers of the sport without any of the counter-arguments.

It is time for our governing body to speak up and maybe even review Professor Pocock’s report to see whether it stands up to an academic review.

The issue is that by the RFU not saying anything, the media is allowed to have a one-sided discussion of the issue with no real opposing view from the rugby community.

This is impacting potential new players and parents, which may be dissuaded from trying out the game due to these media reports.