Progress for Women’s Rugby with Success of Twickenham Varsity 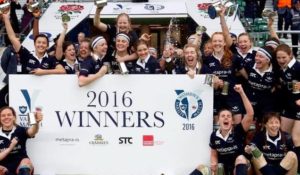 The men’s Varsity match was action-packed and historic as it ended Oxford University ‘s six-year winning streak with a 23-18 Cambridge win.

The event was also historic because it was the second year that the women’s Varsity match was hosted at Twickenham Stadium – cementing its place as a permanent fixture in the Twickenham Varsity experience.

The women’s match was full of excitement and demonstrated great skill and improvement on last year’s performance with the Oxford University women taking home the win with a 3-0 scoreline.

The addition of the women’s Varsity match to the Twickenham Varsity experience by two of the oldest and arguably most traditional universities in the world signifies real progress for women’s rugby as a whole and has outlined a path for other clubs and universities to follow to overcome existing impediments to the development of women’s rugby. 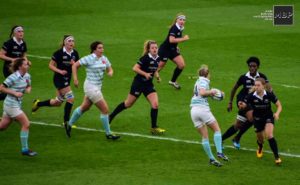 The women’s rugby Varsity was first played in 1988, and for the past 28 years the teams have alternated the Varsity location between Oxford University’s Iffley Road pitches and Cambridge’s Grange Road.

Whilst two matches have always been hosted at Twickenham Stadium, until last year it has traditionally been the Under 21s team that has had the benefit of preceding the Blues’ teams.

Due to various logistical reasons, it is impossible for Twickenham Stadium to host three rugby matches on the same day, so there was a significant impediment for the women to precede the men’s game as it would mean that the Under 21s would lose out on their opportunity to play at Twickenham Stadium.

It is important to note that whilst the rugby and rowing varsities are hosted in London, all other Oxford-Cambridge university varsity matches are hosted at either Oxford or Cambridge venues on an annual basis, so the idea that the Under 21s would have to play their varsities at a University location is not in any way unusual.

As such, the decision really came down to this – who should have the opportunity to play at Twickenham Stadium alongside the men’s Blues? Should it be the women’s Blues or the men’s Under 21s team?

Over the course of many years the women’s team built up support behind the scenes to tip the argument in their favour through the support of old member’s (from both the men’s and women’s clubs), the current men’s and women’s committees and sponsors. This was not by any means an easy feat but the champions of this cause were steadfast in their determination to make this a reality. 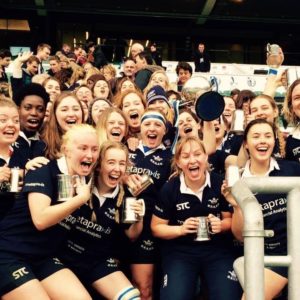 Whilst the men’s teams have traditionally benefited from a professional set up that has included full-time coaches, administrative staff, sponsors and training facilities, until last year the women’s teams have been run by the players themselves (like most of the other sports clubs at the Universities) with some support from the men’s teams.

At both Universities the men’s and women’s rugby clubs were separate (e.g. OURFC and OUWRFC) and whilst the men’s teams are run akin to a professional rugby club, the women’s set up was heavily dependent on yearly committee changes, student workloads and sponsorship changes, which resulted in various issues, as can be reasonably expected from an amateur student club.

It cannot be ignored that some members of the men’s clubs were very supportive of their respective women’s teams and assisted them with sponsorship opportunities, allowed them to use their private gym facilities and private pitches, invited them to their committee meetings and supported them in any way that they could. However, the clubs were not run holistically.

This was especially evident in the form of sponsorship. The men regularly secured large sponsorship contracts due to sponsor’s interest in the Varsity match exposure. Some years the women were allocated a portion of such sponsorship but other years they were not allocated any funds – depending on the economic climate and the sponsor’s desire to include the women in their sponsorship arrangements.

This all changed once the sponsor’s backed the decision for the women’s match to be played alongside the men’s. Both clubs have now merged and agreed to adopt the same name (e.g. OUWRFC is now OURFC) so that the club is now run holistically and the women’s clubs benefit from many of the same advantages as the men, which has had a huge impact on the standard of rugby that they are able to produce.

One of the big concerns for putting the women’s rugby teams on the same stage as the men’s rugby match was that it could demonstrate the discrepancy in the level of rugby skill and standard between the men’s and women’s game.

This was contributed by the fact that the women normally played their rugby match at the end of their rugby season in March, which gave the women’s teams half a year to prepare for the match. On the other hand, the men’s Varsity is played in December – just two months after the start of term.

The way that the men have traditionally prepared for the early timing of the Varsity match is that they do not participate in any BUCS league matches but rely on carefully planned tours and friendlies that assist them with their preparation for the big day. They also train throughout the summer, which is made possible by the additional funding and coaching availability – not to mention player dedication / availability;.

This is assisted by the fact that the men’s committee is aware of the players that will be coming to join the club a year in advance, which assists them with their preparation process. This has not been traditionally the case with the women’s teams, which would only discover their player pool once term starts in October.

Although the initial transition year was difficult as the women had to play a Varsity match in March and then again in December, the women’s teams have been able to adjust very quickly and there has been a clear increase in skill and professionalism in the performance of the two sides as was evident in this year’s women’s Varsity match.

The inclusion of the women’s rugby match as part of the Twickenham experience involved overcoming many challenges, including (1) historical impediments, (2) structural & funding difficulties and (2) misconceptions about the women’s game.

Women’s clubs all around the word face these same issues on a regular basis. However, the success of the inclusion of the women’s Varsity Match in the Twickenham experience by two of the most conservative and “old school” Universities in the world demonstrates that with the influence of sponsors and the support of men’s clubs, women’s rugby can achieve great things in a very short amount of time.